McConnell: 'This Shutdown Is Going to Get a Lot Worse' 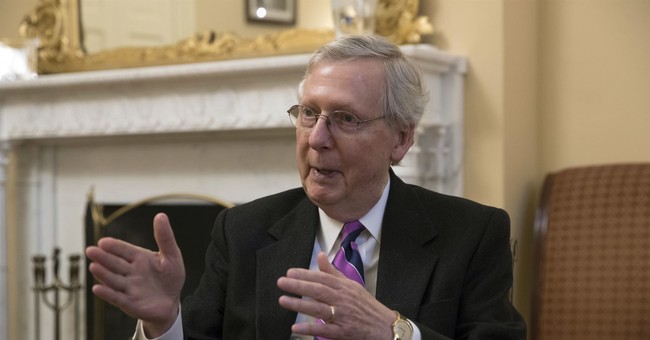 Senate Majority Leader Mitch McConnell (R-KY) warned that the government shutdown will get a lot worse if the Democrats continue to refuse to vote for "commonsense legislation." The "Schumer Shutdown", as GOP leaders are calling it, has been going for nearly 40 hours now, since Friday night after the senate failed to reach the 60 votes needed to keep the federal government funded.

“This shutdown is going to get a lot worse tomorrow. A lot worse. Today would be a good day to end it. All we have to do is pass the common sense legislation that the senate is currently considering - ending a government shutdown and ensuring healthcare continues for vulnerable children. There’s nothing in this measure that my democratic friends cannot support” McConnell remarked

Sen. McConnell then laid forth the following options, saying that the scheduled vote for 1:00 AM Monday morning could occur a lot sooner if Sen. Schumer simply removed his procedural objection.

“So, here’s the situation. Nothing changes, the cloture vote will be no sooner than 1:00 am tonight. We could resolve this much earlier, if the democratic leader withdraws his procedural objection and allows the senate to proceed to a vote. Our constituents want us to end this. Secretary Mattis, our military leaders, and our governors want us to end this. And we can. Today is the right day to do it."

MOMENTS AGO: Sen. McConnell on Senate Floor: “This shutdown is going to get a lot worse tomorrow. A lot worse. Today would be a good day to end it." pic.twitter.com/tii5D00TPs

It is unclear what agreement will be reached, As the clock ticks, the divides between the two parties are deepening.