MLK Jr.'s Niece: 'Trump Is Not a Racist' 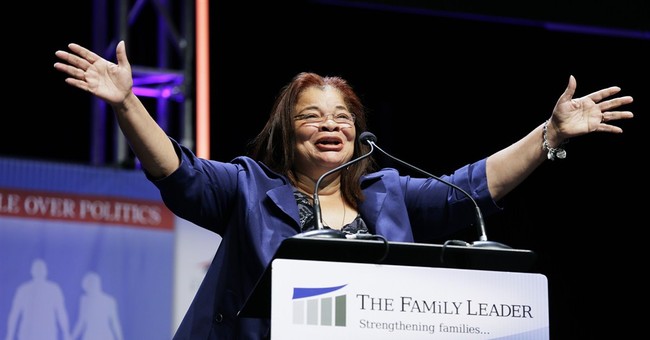 Rev. Martin Luther King Jr.'s niece, a conservative, was interviewed by Fox and Friends today and defended the 45th president of the United States against accusations of racism, calling critics “outrageous.”

President Donald J. Trump fell under a barrage of criticism this week, after a Democratic senator alleged that he referred to Haiti and several other nations as “sh*thole” countries during immigration reform negotiations.

"Racism is just a word that is being bandied about and thrown... at the president unjustly," she said. "President Trump is not a racist."

She also defended his alleged remarks, saying they were targeted towards the governments of those countries, not necessarily the people. "Some of their own leaders have taken advantage of them," she said.

On Monday, America will celebrate MLK Day in honor of the civil rights hero. His niece is a committed activist in defending and preserving King's legacy. She also said this week that if he were alive today he would be a ' pro-life activist.

“He said the Negro cannot win if he is willing to sacrifice the futures of his children for immediate personal comfort and safety,” King said. “Abortion, of course, forces us to do exactly that.”

“I really believe that if my uncle were here today, he would encourage us to find solutions to the problems, even women’s problems, and all problems, without having to do violence to babies in the womb. I am just convinced that he would agree with that,” King said.

“As the niece of the Rev. Dr. Martin Luther King, Jr., and I emphasize the ‘reverend’ because history has not always recorded his spiritual aspects … I have been mostly impacted by his messages of unity, of racial reconciliation, of course nonviolence, and the strongest has always been and will always be for me the agape love message,” Alveda King told The Daily Signal in an interview Friday. “One of the things that we would say [is], ‘We must learn to live together as brothers,’ and I’ll add, as sisters, ‘or perish together as fools.’”