The Left Eats Their Own: Anger Towards Schumer & Pelosi for Deals with Trump 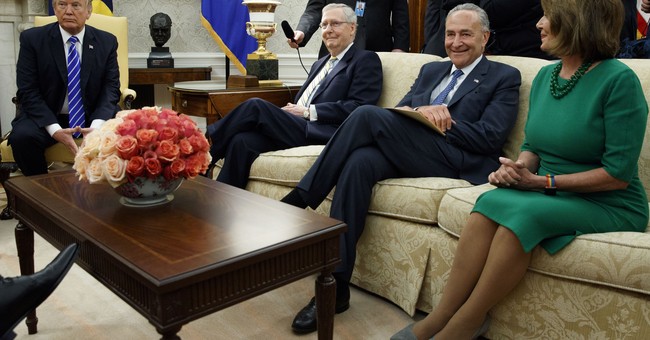 Progressives are furious at  Democratic House Minority Leader Nancy Pelosi and Senate Minority Leader Chuck Schumer. In the far left's minds, the two are “normalizing” President Trump as they continue to negotiate immigration with the Republican president.

Despite reports indicating President Trump’s positions on amnesty and DACA are shifting to the left, many in the progressive movement recoil that any discussions are occurring at all. Campaign Director Justin Krebs at the far-left group MoveOn.org maintains that “nothing Trump has done should change the fact that he’s pursuing a toxic agenda” and that “Democratic leaders should not forget that.”

Murshed Zaheed, of CREDO  Action, went further claiming that the California and New York representatives were often “out of touch with the zeitgeist of the progressive movement.”

Democratic Rep. Gerry Connolly of Virginia cautioned Democrats dealing with Trump. “Let’s not fool ourselves, he is this person we know, and I just think there must be both political and moral limitations with how far we’re willing to cooperate with that.”

Still some Democratic organizers are showing support for negotiations with President Trump. Rodell Mollineau, a veteran Democratic strategist, put it this way “We might have to deal with this guy for four years. What can we do during that time to save America?”

For President Trump’s part, his own base is just as angry. Many are claiming the president is betraying his promises. Many Trump voters are worried that border wall, the cornerstone of his campaign, will not happen. "The base will leave him. They can’t support him anymore,” said Rep. Steven King if a wall is not completed.

But, President Trump insists that he will get the wall claiming "the wall will come later, we're right now renovating large sections of wall, massive sections, making it brand new."