Why Is the Army Rushing to Repaint Its Desert-Camo Vehicles Green? 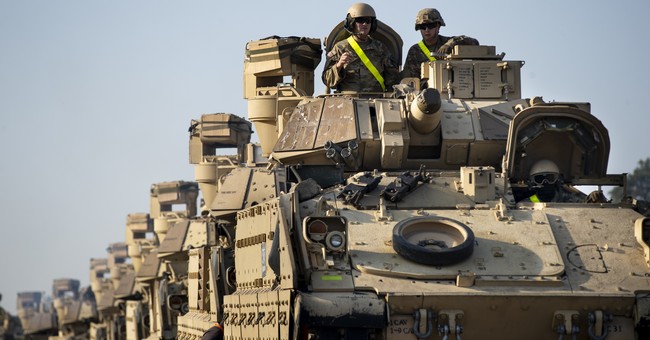 At Fort Hood in Texas, an order recently came down for a "rush" job on 49 military vehicles — specifically, that they be repainted from their current desert camouflage to a green color that's more suited to woodlands or temperate climates.

According to The San Antonio Express-News, "Gary Pasley, his partner, David Stidham, and a small team of soldiers had just 19 days to repaint 49 pieces of military equipment ranging from Humvees to medium tactical vehicles" earlier in June.

The GIs washed the vehicles and equipment so Pasley and Stidham could paint them a dull green, covering the familiar desert tan. That prompted Pasley, 44, an Iraq War veteran, to speculate that the Army’s priorities were shifting away from the Middle East and Afghanistan.

“I’m pretty sure that we’re downsizing from that region of the world and kind of focused on our efforts elsewhere, so I would say the vehicle (color) might be terrain appropriate,” Pasley said.

Just where the new focus might be, neither he nor the Army could say.

After 20 years of fighting wars in vehicles painted to match the desert, Fort Hood now has a relative handful of vehicles made over with a basic olive drab — the Army calls it “woodland green” — that can serve as the primer for a common camouflage pattern standardized for each vehicle type.

As yet, no camo has been applied.

The vehicles are those of Fort Hood’s 13th Expeditionary Sustainment Command, which issued a brief statement saying the action “signals a switch in readiness from fighting in arid places like the Middle East to fighting in more verdant regions.”

Verdant as in green, with grass or other rich vegetation. Though the Army didn’t elaborate, that could be islands in the Pacific or forests in Europe. The Marines have recently conducted field training in Norway.

The 13th ESC’s commander said in an interview that the order was part of building “field craft” among soldiers, whether they’re training to fight in Europe, as the 1st Cavalry Division is now pegged to, or with the U.S. Indo-Pacific Command, where the 4th Infantry Division, formerly at Fort Hood but now at Fort Carson, Colo., would be deployed under current war plans.

The report on the rushed refresh for the vehicles' paint points out that the "last time the Army painted its vehicles, the shift in priorities — and location — was readily apparent" when the U.S. "went to war in Afghanistan and Iraq with multiple divisions, hundreds of thousands of troops." The Express-News noted that the fresh paint jobs are "part of the Pentagon’s move away from counterinsurgency warfare and a return to what some call 'great power' conflicts that could involve China and Russia. If it feels like the old Cold War to those of a certain age, well, it should," the report added.

Indeed. President Joe Biden's first 17 months in office have not exactly been great for international relations or known for calming foreign foes.

When it comes to Russia, Biden blundered his way into an ad libbed comment while speaking in Poland that "for God's sake, this man cannot remain in power," a seemingly plain call for Putin to be deposed or for another means of regime change in Russia. The White House tried to walk the president's off-the-cuff remark back, but Biden doubled-down on his statement anyway.

Then, while on a trip to Asia, Biden stated a position toward Taiwan and China that ran contrary to the long-standing policy of the United States. The president answered "yes" when asked if he was "willing to get involved militarily to defend Taiwan if it comes to that," despite the fact that the U.S. policy has been to arm Taiwan, but not to engage with our own forces, if China attacked the island nation. Again the White House rushed to clarify what Biden *meant* to say but didn't.

Wherever the next conflict that sees a president order America's forces into battle is, Retired Air Force Gen. Gregory “Speedy” Martin posited to The Express News that, “I think what the Army is trying to do — it may be subtle to some — they’re trying to get people’s minds off of the desert environment and into the more likely environments where we’re going to face a potential adversary." Under Biden, it seems like potential adversaries are greater in number and bolder in action.