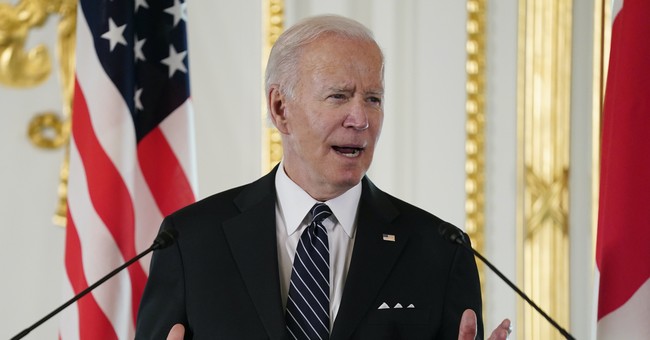 As Leah reported earlier, President Biden made comments while on his swing through Asia about how the United States would react to a potential Chinese invasion of Taiwan and, as a result, the White House is springing into action — yet again — to do damage control.

Speaking at a news conference in Japan, Biden said “yes” when a reporter asked whether he’s “willing to get involved militarily to defend Taiwan if it comes to that.”

Confirming the president’s position, the reporter again asked: “You are?”

“That’s the commitment we made,” the president responded.

Biden's words, according to The New York Times, "surprised some members of Mr. Biden’s own administration watching in the room" and set off another round of quick clarifications from West Wing aides about what the president *meant* to say.

The gaffe also unsurprisingly gave China an opening to lash out at the United States in its ongoing propaganda war against free countries. "China has no room for compromise or concessions on issues involving China’s core interests such as sovereignty and territorial integrity," said the CCP's foreign ministry spokesman Wang Wenbin.

"The White House quickly tried to deny that the president meant what he seemed to be saying," The Times added in their dispatch from Tokyo. "'As the president said, our policy has not changed,' the White House said in a statement hurriedly sent to reporters. 'He reiterated our One China Policy and our commitment to peace and stability across the Taiwan Strait. He also reiterated our commitment under the Taiwan Relations Act to provide Taiwan with the military means to defend itself.'"

But, as The Times notes, Biden's statement "went beyond simply reiterating that the United States would provide Taiwan with arms, because the question was posed as a contrast to what he had done with Ukraine."

As many observers pointed out, this is not the first time President Biden has said something while on a foreign trip or about China and Taiwan that needed to be quickly cleaned up by his handlers.

Oh my gosh we are doing this again. https://t.co/MB9DiCitQm

In fact, President Biden has had to have his comments on China and Taiwan "fixed" by White House aides three times in just the last year. Last October, Biden told CNN's Anderson Cooper that "yes" the United States would come to Taiwan's defense if China launched an attack, adding "we have a commitment to do that." The White House had to quickly clarify that Biden "was not announcing any change in our policy nor has he made a decision to change our policy."

And last August, in a CBS News interview, Biden stated that the United States had "a sacred commitment" to NATO and would "respond" if there was an invasion or attack on our NATO allies. "Same with Japan, same with South Korea, same with Taiwan," Biden then added. But again, the U.S. position toward Taiwan has not been that we would join a fight to defend Taiwan as we're bound to do by NATO's Article V, and the White House had to rush a statement clarifying the Biden administration's "policy with regard to Chinese-claimed Taiwan has not changed."

Even more recently, President Biden stepped in it with his comments during a trip to Europe amid Russia's war on Ukraine. At the end of his remarks delivered in Poland, Biden said of Putin, "For God's sake, this man cannot remain in power." And, yet again, the White House scrambled to provide an explanation for Biden's imprecise and non-strategic verbiage. "The President's point was that Putin cannot be allowed to exercise power over his neighbors or the region," a quickly issued statement claimed. "He was not discussing Putin's power in Russia, or regime change," the spokesperson rather unbelievably claimed.

While the White House has done its apparent best to limit the number of Biden gaffes — especially ones that sound like the president is trying to wade the United States into some sort of World War III on two fronts — they're just not able to keep up. Even after moving Biden's events from the Oval Office in the actual White House to a Truman Show-esque stage in an adjacent auditorium, aides still can't keep their boss from muddying the waters on critical topics of international impact.