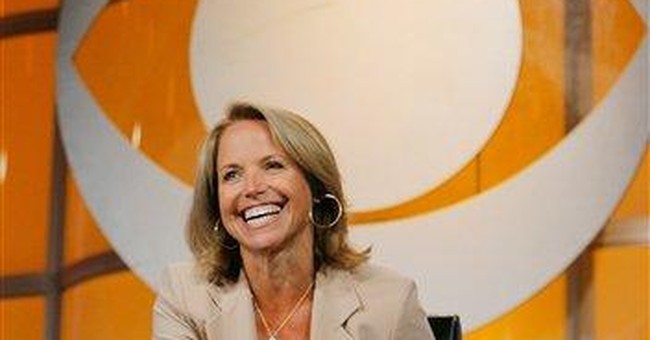 As Julio reported this week, Katie Couric edited her interview with Ruth Bader Ginsburg to exclude negative comments the late Supreme Court justice made about sideline protests of the national anthem staged by athletes such as Colin Kaepernick.

The 2016 interview went to air without some of Ginsburg's comments because Couric decided the then-sitting Supreme Court justice was "elderly and probably didn't fully understand the question." A strange claim of Ginsburg's answer that was quite cogent:

Ginsburg said those who kneel during the national anthem are showing "contempt for a government that has made it possible for their parents and grandparents to live a decent life" and "Which they probably could not have lived in the places they came from...as they became older they realize that this was youthful folly. And that's why education is important."

This latest admission from Couric, though, is not the first time she's played fast and loose with the truth in her attempts to push her own chosen narrative rather than an honest depiction of her subjects.

Before cutting comments from Ginsburg, Couric was busted for deceptively editing interviews in her anti-gun "documentary" in 2016. Part of the film included Couric grilling gun owners in an attempt to demonize them. They provided good answers to Couric's answers, so "she had to destroy them," as our own Katie Pavlich explained at the time:

The Free Beacon's Stephen Gutowski just busted Couric for deceptively editing an interview with gun owners from the Virginia Citizens Defense League. How? She asked them questions, they gave good answers and therefore, she had to destroy them. Instead of showing their answers, Couric and her film team intentionally edited the interview to make them look like unhelpful, uniformed, gun toting morons.  She also painted them as enablers of felons and terrorists.

Couric would eventually acknowledge her journalistic malpractice with a half-hearted, unapologetic statement: "I take responsibility for a decision that misrepresented an exchange I had with members of the Virginia Citizens Defense League." Nevertheless, the film continued to be sold with the malicious edit.

Another Couric "documentary" on food and obesity in America from 2014 was plagued by similar misrepresentation accusations by a subject who claimed his interview was selectively cherry-picked to portray him as uninformed:

"They had reached out to me...and indicated to me that they were particularly interested in having a diversity of viewpoints," Dr. David Allison, who appeared in "Fed Up," told FOX & Friends.

Allison said he was taped for 90 minutes, but the film only included a small fraction of his interview. The clip used shows Allison as he loses his train of thought and appears uncertain of how to answer a question.

Back in 2007, it was another kind of accusation Couric faced when she was caught plagiarizing in a video essay that lifted, nearly word-for-word, a previously published Wall Street Journal column:

The essay was immediately removed from the CBS News Web site, and a correction was posted in its place. The network did not identify the producer who was fired.

And of course there's the matter of her biased and badgering interviews with then-Republican vice presidential candidate Sarah Palin when Couric's slanted questions and segments sought to entirely discredit the Alaska governor's ability to lead. Palin would reflect on the interviews saying:

With this many follies in her career as a journalist and filmmaker, one might think that people would stop agreeing to sit down with her. Instead, it seems her star power has continued to carry her through as she bounced from NBC to CBS to Yahoo! News to ABC. The latest example of using her power to mold the truth to fit her narrative is not her first and, as long as someone is willing to give Couric a platform, unlikely to be her last.