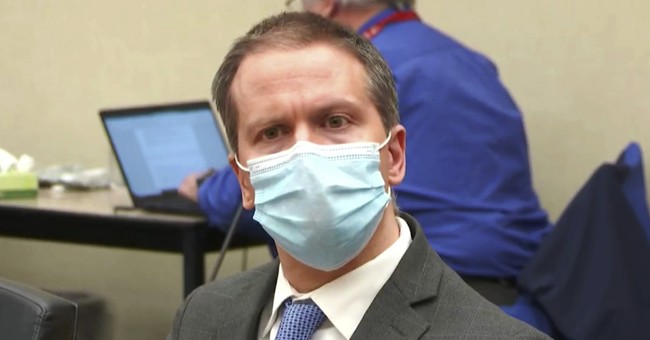 At the end of the 90-day deadline to file an appeal to a Minneapolis jury's conviction on all three charges he faced in the May 2020 death of George Floyd, Derek Chauvin made official his appeal on Thursday.

Chauvin was found guilty in late April on the three counts he faced: second-degree unintentional murder, third-degree murder, and second-degree manslaughter. In late June, the former Minneapolis police officer was sentenced to 270 months in prison, but now Chauvin is seeking to appeal all of those decisions.

According to breaking coverage of the appeal Thursday night on Twin Cities affiliate FOX 9, he's so far moving forward with this appeal on his own.

"Derek Chauvin had 90 days to file this appeal after his sentencing date — tonight, we are at exactly 90 days," explained FOX 9's Amy Hockert. "Chauvin lays out about 14 different arguments among them, he said he was denied a fair trial because he had asked for a change of venue and didn't get it. He also claims he was at a disadvantage because the jury wasn't sequestered during the entire trial."

A copy of Chauvin's appeal documents shows the 14 issues he seeks to raise on appeal:

Interestingly, there's no direct mention of the situation that occurred as Chauvin case jurors deliberated when Rep. Maxine Waters (D-CA) showed up in the Minneapolis suburb of Brooklyn Center, Minnesota, and told gathered protestors, some of whom became violent as they looted the area, that "we are looking for a guilty verdict."

At the time, the judge in Chauvin's case admitted that "Congresswoman Waters may have given you something on appeal that may result in this whole trial being overturned."

FOX 9's reporting also noted the recent Minnesota Supreme Court decision that overturned a third degree murder charge for another former Minneapolis police officer found guilty of the charge by a jury. Mohamed Noor was convicted on a third-degree murder charge in 2019, but Minnesota's highest court threw that out, and ordered a lower judge to adjust Noor's sentence accordingly.

Minnesota’s top court vacated the murder conviction of former Minneapolis police officer Mohamed Noor on grounds that there was insufficient evidence to prove “depraved-mind murder,” which is required for such a charge to stand.https://t.co/lHiDduGDei

A legal analyst told FOX 9 that Noor's overturned conviction could impact Chauvin's appeal and, if his third-degree murder conviction is also overturned, result in a reduced sentence from the 22.5 years he's currently serving.

Notably, Chauvin is pursuing this appeal on his own and without any legal representation. As Hockert explained, "court documents show that he has actually been denied representation by a public defender in this appeal and he says he doesn't have the means to hire a private attorney."