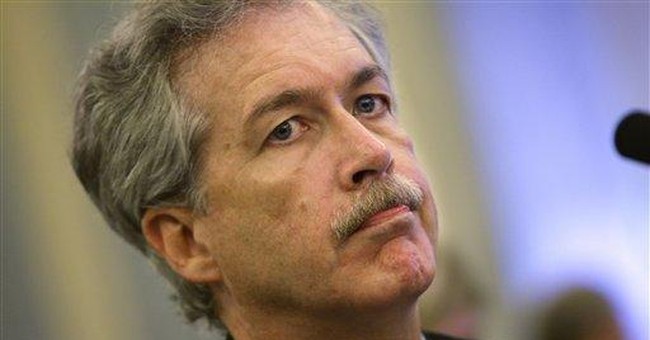 In press briefings from the Pentagon, State Department, and White House Monday, Biden administration officials seemed yet again perplexed by questions from reporters on the looming August 31st deadline by which all U.S. forces are supposed to be out of Afghanistan. As it turns out, they may have been trying to tamp down talk about overstaying the deadline or negotiating an extension because Biden's CIA director was in Kabul for a covert meeting with Taliban leader Abdul Ghani Baradar.

As The Washington Post reported, "President Biden dispatched his top spy, a veteran of the Foreign Service and the most decorated diplomat in his Cabinet, amid a frantic effort to evacuate people from Kabul international airport."

"The CIA declined to comment on the Taliban meeting," The Post's report continued, "but the discussions are likely to have involved an impending Aug. 31 deadline for the U.S. military to conclude its airlift of U.S. citizens and Afghan allies."

The Taliban's track record is long and sordid. Even in recent days, the Pentagon has lamented about their frustration with Taliban fighters at checkpoints not abiding by a tenuous agreement with the United States to allow safe passage for those evacuating Afghanistan.

But because the Biden administration chose to take a seat at the table with the Taliban, it was then obliged to go to enemy territory to unceremoniously and humiliatingly beg for an extension to the deadline for America's departure.

Raising more questions about what the Biden administration thinks it's doing, what they're using to negotiate, and who's ultimately in charge, notice of the covert meeting wasn't even given to the House Intelligence Committee.

The meeting comes as President Biden faces pressure from America's allies to stay past the deadline, something the Taliban threatened as a "red line" issue that would result in "consequences."

Perhaps, then, the know-nothings in the Biden administration were reluctant to share information with the American people in order to save face for CIA Director William Burns while he groveled before the Taliban. The administration's ongoing negotiations also help explain the lack of criticism aimed at the Taliban from the President and his administration, instead choosing to repeat talking points about desiring an "inclusive" government under Taliban control.

On Monday, Pentagon Press Secretary John Kirby fumbled his way through an answer on why the Pentagon hadn't addressed plans to potentially continue operating at Kabul's Hamid Karzai International Airport in order to make sure every American was rescued. Jake Sullivan was equally unclear from the White House Podium, as was Ned Price at the State Department. All their answers boiled down to: We're going to do as much as we can between now and August 31st and we're not going to talk about hypotheticals beyond the end of August.

Their words were less than reassuring to those watching videos of Americans and Afghan allies being whipped or beaten in the streets of Kabul, compounded by their inability to say how many Americans remain stranded in Afghanistan — a reality Jen Psaki tried to deny — nor how many Americans had already been airlifted out of the country.

With just a week remaining until the current deadline for the United States to be out of Afghanistan, exceedingly more government leaders — including Democrats — believe it's unlikely Biden will complete an evacuation of Americans, special immigrant visa applicants, and at-risk Afghans before August 31st.

The outcome of the CIA Director Burns' meeting with the Taliban seems to be complete rejection. In a bizarre propaganda press conference on Tuesday, a spokesman for the terrorist group rejected any extension to the August 31st deadline. Worse yet, the Taliban reportedly will no longer allow Afghans to travel to the airport in Kabul.

JUST IN - Taliban not to extend the August 31 deadline and Afghans are not allowed to go to #Kabul airport anymore, Taliban spokesman Zabihullah Mujahid says in a press conference. pic.twitter.com/KRKzqaIhaZ

So, we reportedly have the Taliban's answer to the Biden administration's humiliating display of deference granted through ongoing negotiations and meetings with top-level officials — pound sand.

Now all that remains to be seen is whether President Biden and his administration have the fortitude to defy the Taliban and do what's necessary to remain in Kabul, maintain control of the airport, and rescue Americans in the face of the Taliban's aggression.