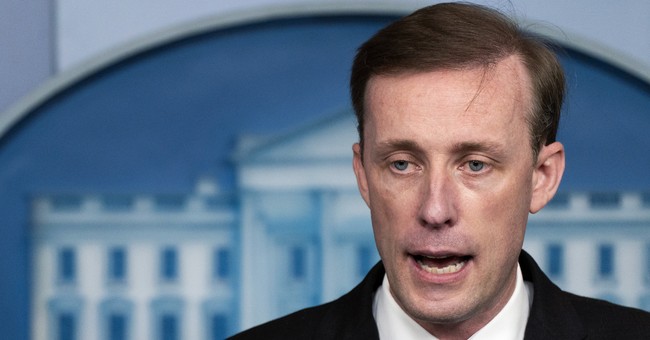 Jen Psaki was joined at the White House podium by National Security Advisor Jake Sullivan on Monday in the administration's latest attempt to shore up remaining public support for President Biden's bungled handling of Afghanistan as new polling shows just 25 percent of Americans approve of his actions amid the withdrawal.

Sullivan reiterated multiple times that the Biden administration is in daily conversation with Taliban leaders but wouldn't say whether President Biden thinks America needs more time to complete an evacuation.

Sullivan also refused to say whether the Biden administration is acting under the assumption that it needs permission from the Taliban to remain in Afghanistan past the current August 31st deadline. "We believe we have time to get out any American who wants to get out," Sullivan said despite not knowing how many Americans remain trapped behind Taliban lines.

Does not have the exact number of Americans evacuated.

When asked why, if Biden knew there would be chaos, the American people were not prepared for the anarchic scenes we've watched in the last week, Sullivan repeated Biden's line that such chaos was inevitable. And rather than providing concrete plans or details that might reassure the American people, Sullivan took a page out of Biden's book and blamed Donald Trump for some of the mayhem that's unfolded.

JAKE SULLIVAN: "This operation...has produced searing images of pain and desperation. But no operation like this, no evacuation from a capitol that has fallen into civil war could unfold without those images." pic.twitter.com/1CJnXJvh2r

Of course, before Kabul was overrun by the Taliban, President Biden had been insistent that a Taliban takeover was anything but inevitable and that there wouldn't be scenes of helicopters rescuing stranded Americans a la the fall of Saigon. "We will not conduct a hasty rush to the exit. We’ll do it responsibly, deliberately, and safely," Biden said in April.

Joe Biden promised “no circumstance where you’ll see people lifted off the roof” of the U.S. embassy in Afghanistan.

Biden and his administration's overly optimistic depiction of what a U.S. withdrawal would look like is likely partially responsible for the tanking public support for the President's handling of America's exit from Afghanistan. But instead of working to mitigate the damage done by Biden's rosy outlook before Kabul fell, Psaki continued to make things worse.

When asked a question about the fate of Americans stuck behind Taliban lines, she took issue with the verbiage of the question. "I think it's irresponsible to say Americans are stranded," she interrupted, adding "they are not."

PSAKI: "I think it's irresponsible to say Americans are stranded. They are not."

DOOCY: "'There are no Americans stranded' is the White House's official position on what's happening in Afghanistan right now?" pic.twitter.com/0FEq5VkO6V

In remarks preceding Psaki's briefing, President Biden spoke on the FDA's approval of Pfizer's Wuhan coronavirus vaccine but failed to mention the crisis in Afghanistan or take any questions from reporters.