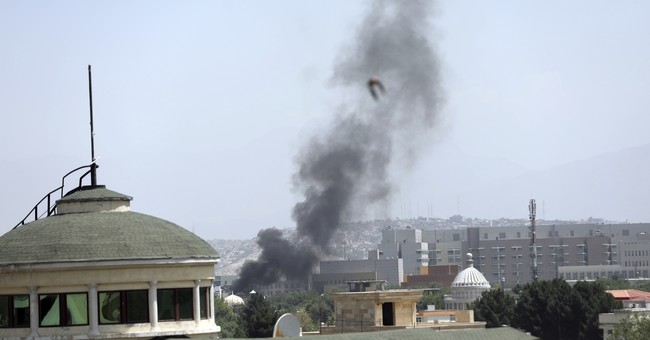 As President Biden prepares to, finally, address the nation on the now disastrous exit from Afghanistan Monday, he sits atop a heaping pile of overly optimistic comments made by himself and his administration that were debunked in just a matter of hours over the weekend.

From Pentagon brass to the State Department to the White House, the Biden administration now seems to have been caught either entirely flat-footed by the Taliban's swift toppling of the Afghan government or to have engaged in a months-long propaganda campaign to mislead the American people on the reality of Afghanistan's future after our military's departure.

Regardless of President Biden's latest attempt to stem hemorrhaging support for his leadership, here's what he and his administration have said on the topic of Afghanistan before all was laid bare in the fall of Kabul.

A February 2020 interview with CBS' Face the Nation shows a then-candidate Biden defiantly insisting that he would not bear any responsibility for a potential Taliban takeover of Afghanistan. "Do I bear responsibility? Zero responsibility," he said.

Biden in 2020: If the Taliban takes over, I bear "zero responsibility." pic.twitter.com/3uXThtaEdx

General Mark Milley explained in a press briefing in May that the Pentagon's "primary military objective" in Afghanistan was "to conduct a safe, responsible, and deliberate retrograde of U.S. forces from Afghanistan in good order."

#GenMilley during today's @DeptofDefense press briefing with @SecDef: "Regarding Afghanistan, our primary military objective is to conduct a safe, responsible, and deliberate retrograde of U.S. forces from Afghanistan in good order." pic.twitter.com/EQnpflqkg7

Addressing the potential of Afghanistan falling to Taliban fighters in June, Secretary of State Antony Blinken said "I don't think it's going to be something that happens from a Friday to a Monday" and that he "wouldn't necessarily equate the departure of our forces... with some kind of an immediate deterioration in the situation."

BLINKEN IN JUNE: "I don't think it's going to be something that happens from a Friday to a Monday...I wouldn't necessarily equate the departure of our forces...with some kind of immediate deterioration in the situation." pic.twitter.com/4uHHbFMV0a

In July, President Biden himself told the American people that "no" a Taliban takeover of Afghanistan was "not inevitable... because you have the Afghan troops, have 300,000 well-equipped — as well equipped as any army in the world — and an air force, against something like 75,000 Taliban. It is not inevitable."

Last week Pentagon Press Secretary John Kirby sought to dispel predictions of a Saigon-like exit from Kabul, insisting that the United States was not abandoning Afghanistan but rather "doing the right thing at the right time."

REPORTER: "How are you going to avoid a parallel with the Fall of Saigon?"

PENTAGON: "Nobody is abandoning Afghanistan. It's not walking away from it." pic.twitter.com/EW7bUlbrcn

Just a day later last Friday, as the Taliban sat 30-some miles outside of Kabul, Kirby reported that Afghanistan's capital city "is not, right now, in an imminent threat environment."

Q: "Is Kabul under threat? Is Kabul isolated?"

Within 48 hours of Kirby's denial of an "imminent threat" to Kabul, the president of Afghanistan had fled and the Taliban were within the city. If that doesn't meet the "ready to happen or about to take place" dictionary definition of imminent, it's hard to imagine what the Pentagon thinks the word means.

Needless to say, the U.S. withdrawal — or retrograde — has been anything but the safe, responsible, or deliberate exit in good order General Milley promised. It's like Saigon, but somehow worse. It looks like Argo and World War Z mixed with 13 Hours with a dash of Mission Impossible. That is, it's been complete and utter chaos.

And now, as President Biden prepares to offer some form of explanation to the American people whose myriad questions were ignored by his administration for days, here's what the situation in Kabul looks like:

Kabul's international airport was one of the last places in the Afghan capital on Monday not controlled by the Taliban. The U.S. State Department said all its embassy personnel had been evacuated to the airport, which is defended by the U.S. military. https://t.co/ZHiF97E2HD pic.twitter.com/c0NmF7NrIl