Thanks to Inflation, Americans Face Most Expensive Independence Day Weekend in Years 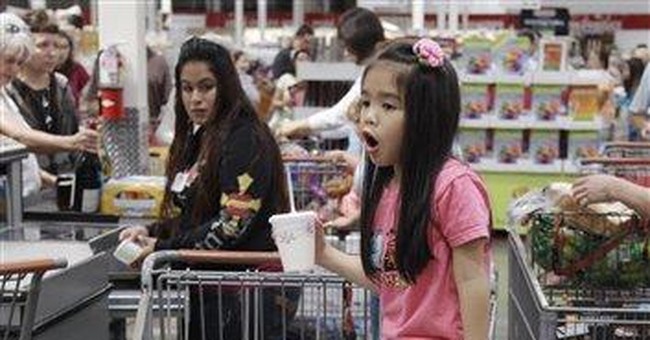 At the pump and in the grocery store, Americans preparing to celebrate Independence Day will see their wallets take the biggest hit in years as inflation continues to drive up prices. Not only are they noticing the increased expense, they know who to blame for inflation.

According to AAA, the nationwide average for unleaded fuel hit $3.09 per gallon, the highest ahead of the Fourth of July weekend since 2014. And as more states and businesses relax restrictions put in place due to the Wuhan coronavirus, this weekend will see 43.6 million Americans — the most travelers so far this year — hit the road, per AAA. "Today, 89 percent of US gas stations are selling regular unleaded for $2.75 or more. That is a stark increase over last July 4 when only a quarter of stations were selling gas for more than $2.25," a spokesperson said.

It's not just at the pump where Americans are feeling the impact of inflation, they're also seeing common food items get more expensive.

People are most likely to say the price of gas and groceries is going up the most. These are the things people notice everyday.

This isn't your father's spending debate, with academic complaints about long-term deficits and debts.

This is hitting people in their pocketbooks. pic.twitter.com/9QZHiceBo6

Comparing Labor Department average price data on common goods over the last decade, trips to the grocery store this summer will also be among the most expensive in years.

In Townhall's analysis of data from May 2021 (the most recent month for which the Bureau of Labor Statistics reported average price data), the cost of fruit, meat, vegetables, and beverages reached near decade-highs.

While not everything on Americans' shopping lists hit decade-highs in the most recent data, many other items are more expensive than they were in 2019. Ground beef, ground chuck, potato chips, chicken breast, soft drinks, bacon, and chicken legs are all going to set Americans back more than during the last pre-COVID summer.

Even keeping the lights on and the house cool this Independence Day is more expensive than it's been in the last decade with the average cost per kilowatt-hour hitting 0.140, up from 0.129 in 2011.

As The New York Post noted last month, Americans should be prepared to pay as much as five percent more for the goods and services than they did last year as inflation indicators rise at a pace not seen in decades.

JUST IN: A key inflation indicator rose 3.4% in May, posting its biggest year-over-year gain in nearly three decades. https://t.co/QEGPtdLKoy pic.twitter.com/0aawfW6OMQ

65% said increased government spending contributes to rising prices, more than any other factor.