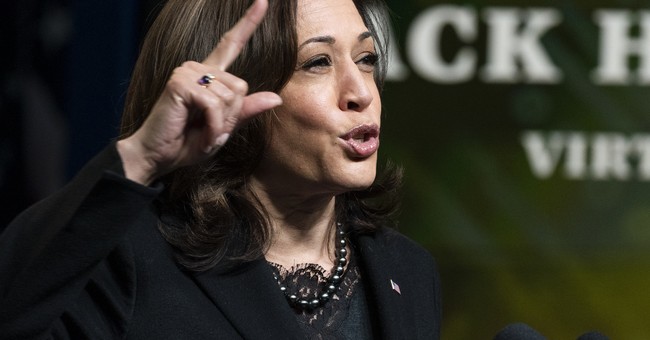 Saying she believed Biden "yet again has reminded us to be optimistic and believe in America" in Wednesday evening's speech, Harris was also asked by George Stephanopoulos to react to the GOP response delivered by South Carolina Senator Tim Scott. Specifically, this portion:

"Today, kids again are being taught that the color of their skin defines them — and if they look a certain way, they're an oppressor. From colleges to corporations to our culture, people are making money and gaining power by pretending we haven't made any progress. By doubling down on the divisions we've worked so hard to heal. You know this stuff is wrong. Hear me clearly: America is not a racist country. It's backwards to fight discrimination with different discrimination. And it's wrong to try to use our painful past to dishonestly shut down debates in the present."

Vice President Harris responded in initial agreement with Senator Scott on whether America is a racist country before equivocating:

"Well first of all, no, I don't think America is a racist country, but we also do have to speak truth about the history of racism in our country and its existence today. And I applaud the president for always having the ability and the courage frankly to speak the truth about it.

He spoke what we know from the intelligence community, one of the greatest threats to our national security is domestic terrorism manifested by white supremacists. And so these are issues that we must confront. It doesn't, it does not, help to heal our country, to unify us as a people, to ignore the realities of that.

I think the president has been outstanding and a real national leader on the issue of saying let's confront the realities and let's deal with it knowing we all have so much more in common than what separates us and the idea is that we want to unify the country but not without speaking truth and requiring accountability as appropriate."

She says: “I don’t think America is a racist country, but we also do have to speak truth about the history of racism in our country and its existence today.” pic.twitter.com/yAOCH366LV

It is surprising, not to mention contradictory, for Harris to call Joe Biden's race record "outstanding" given she tore into her eventual running mate for his record on busing and Senator Cory Booker (D-NJ) attacked Biden for his work with segregationists during the 2020 Democratic primary.

And as far as accountability goes, Harris failed to call out those within her own party who launched into shamefully racist attacks against Tim Scott on Twitter.

During Thursday morning's interview on ABC, Harris also unintentionally refuted false claims by the crack political analysts over on CNN and MSNBC by acknowledging "when we came into office on January 20 we were looking at essentially a fraction of Americans who had been vaccinated."

The fact that a COVID-19 vaccine existed and was already in use—and administered to both Harris and Biden before they took office—is because of the Trump Administration's Operation Warp Speed.

When asked about the illegal immigration crisis raging at our southern border and what "immediate plans" she had to address it, Harris dodged. "I have been taking on the responsibility of dealing with the root causes of migration," she explained before saying "most people don't want to leave home" and it is somehow the United States' responsibility to "give the folks [in Central America] some hope that if they stay help is on the way."