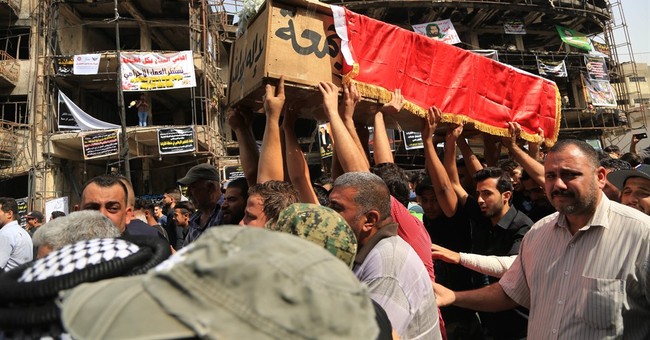 Ramadan, a holy month in Islam in which devotees focus on prayer and fast from dawn until dusk, runs from June 6 to July 6 this year. The month has been marred with a high number of terror attacks around the world as the Islamic State of Iraq and Syria and its affiliates gain power and become increasingly brazen. Townhall compiled every terror attack from the past month in the list below.

On June 6, the first day of Ramadan, an assailant entered a security office near a refugee camp for Palestinians in Jordan and killed five intelligence officers with an automatic weapon. Attacks like this are rare for the pro-western country.

Government officials blamed a Kurdish nationalist group for a June 7 bus bombing that targeted a police bus. Seven officers and four civilians were killed and 51 others were injured.

Two Palestinian terrorists committed a brazen attack on a busy food and shopping center in Tel Aviv on June 9, shooting and killing four and wounding 13.

ISIS fighters are responsible for the two bombings near a Shiite shrine in Damascus on June 11. Officials say the consecutive explosions of car and suicide bombs killed 20, including 13 citizens.

Tensions in the Middle East ran high on June 11, when fighters for the Islamic State’s Khorasan Province branch attacked a police compound in eastern Afghanistan. Five officers were killed and six were injured.

Americans were confronted with Islamic extremism in the early morning of June 12 at the Pulse nightclub in Orlando. Omar Mateen, who pledged allegiance to ISIS, killed 49 people and injured 53 others—most of them Hispanic and gay.

A known radical Islamist stabbed a police captain outside his home and took hostage his partner and the couple’s three-year-old son in suburban Paris on June 14, pledging allegiance to ISIS. When police entered the house, the mother was killed but the child was unharmed.

On June 17th, Boko Haram, an Islamic terror group based in Nigeria and aligned with ISIS, stormed military barracks in Niger to the north. Seven soldiers were killed and 12 were wounded.

The Taliban claimed responsibility for the June 20 bombing of a bus carrying Nepali security guards in Kabul where 14 were killed and eight were injured.

A suicide bomber with unknown terror ties drove a car packed with explosives into a Jordan military post on the border with Syria on June 21, killing six and wounding 14. The soldiers were stationed at the post to help refugees.

A hotel in Somalia’s capital frequented by government officials was attacked on June 25 with gunmen, a car bomb and a suicide bomb. Al-Shabaab claimed responsibility for the incident, which resulted in 15 dead and 25 injured.

A Christian town in Lebanon near the border with Syria was targeted by suicide bombers, who killed five villagers and wounded 15. ISIS, which has often targeted Christians, is suspected to be the culprit in the July 27 attack.

A massive attack on Istanbul’s secure Ataturk Airport on June 28 shocked the world. Three terrorists shot travelers and then blew themselves up, killing 42 people and wounding 239.

On June 30 Kabul faced more senseless violence from the Taliban. A terrorist bombed buses of newly-graduated police cadets and killed 27 and wounded 40.

As Ramadan was nearing an end, Islamic terrorists ramped up their attacks. In Dhaka on July 1, gunmen took hostages at an upscale restaurant popular with foreigners. Two police officers and 21 hostages died, including three students from American universities.

While Americans celebrated their independence this weekend, Iraq suffered one of its bloodiest bouts of violence in years. A suicide bomb on a truck exploded in a shopping district on July 3, killing 215 people and wounding 175. ISIS is claiming responsibility.

Terrorists closed out the month of Ramadan with a deadly string of bombings in Saudi Arabia. One ISIS-linked attack in Medina at the burial place of Prophet Muhammad killed four security officers and injured five, another bomb targeted a Shiite mosque, and a third hit near a U.S. consulate.