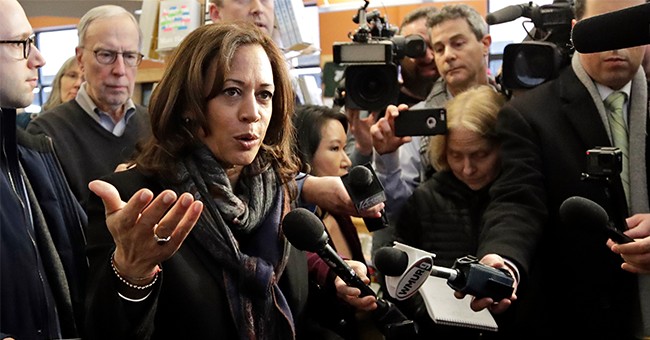 Two weeks ago, Sen. Kamala Harris (D-CA) confessed a truth that left progressives befuddled and conservatives arching an eyebrow: she is the proud owner of a handgun.

"I am a gun owner, and I own a gun for probably the reason a lot of people do -- for personal safety," Harris said at a town hall meeting in Iowa. "I was a career prosecutor.”

CNN, in reporting Harris’ surprising revelation, gave the Democratic senator a great deal of latitude, calling her “responsible” in her ownership and suggesting that someone with her career duties might be forgiven for owning a gun.

The weight of that phrase was a reminder of the personal risk Harris has faced in her career in law enforcement, from being an Alameda County criminal prosecutor, San Francisco district attorney and California attorney general.

A Harris campaign aide said the weapon she owns is a handgun, which she keeps locked up, as a responsible gun owner. According to the aide, the handgun was purchased years ago.

Despite CNN’s attempts to soften Harris’ apostasy on the gun rights issue — which is a not-insignificant right turn given her history of emotional calls to ban assault rifles and preference for enacting stricter gun control measures — at least once progressive thinks Harris’ 2020 presidential run should be canceled.

Peter Funt, the longtime host of the show Candid Camera who later became a prolific op-ed writer for high-profile news outlets, wrote in USA Today that Harris’ gun ownership disqualifies her from running for president on the Democratic ticket.

“When it comes to gun ownership in America, presidential aspirant Kamala Harris has shot herself in the foot,” Funt wrote on Friday.

The former TV host said that Harris should have gotten rid of her gun the minute her career changed and she was no longer in need of the protection a handgun affords.

While progressives support the legal reforms Harris advocates, they also seek a shift in gun culture. That means setting an example for why guns, particularly handguns, are part of the problem, not the solution.

Kamala Harris doesn’t seem to have the courage to concede that owning a handgun for protection is a bad idea. Instead, she has given voters a real choice: Back candidates who care enough about gun control to not own handguns, or support the only major Democratic contender who has one and won't throw it away.

It’s unclear why Funt is singling out Harris when The Washington Post reported earlier in April that six of 18 Democratic presidential contenders are firearm owners. Joe Biden, who declared his intention to run Thursday, brings that number to seven.

If Democrats have designs on ever winning again, they’ll need to begin representing their increasingly progressive base who want stricter and stricter gun reform (if not outright abolishment of the 2nd Amendment), or they’ll need to scale back their own rhetoric on gun control and hope their voters catch up.