Alaskans Plead to Leave U.S. and Reunite with Russia 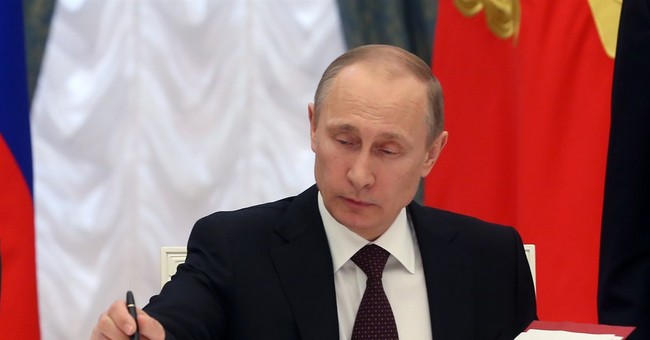 Some Alaskans apparently are not opposed to Russian President Vladimir Putin’s recent annexation of Crimea—in fact, they are hoping to be grabbed up next.

More than 30,000 Alaskans have signed the petition “Alaska back to Russia,” pleading that the White House allow them to secede and join their native land. If the request garners 100,000 signatures by April 20, the White House will make an official response.

Alaska has only been a state for 55 years. Russia owned the territory until 1867, when Secretary of State William H. Seward agreed to pay $7.2 million for President Andrew Jackson’s “polar bear garden.”

One "S.V." of Anchorage launched the almost nonsensical petition:

Russian began to settle on the Arctic coast, Aleuts inhabited the Aleutian Archipelago.

First visited Alaska August 21, 1732, members of the team boat "St. Gabriel »under the surveyor Gvozdev and assistant navigator I. Fedorov during the expedition Shestakov and DI Pavlutski 1729-1735 years

Remember when Texas tried to secede in 2012 with more than 125,000 signatures? The White House demurely responded:

Thank you for using the White House's online petitions platform to participate in your government.

In a nation of 300 million people -- each with their own set of deeply-held beliefs -- democracy can be noisy and controversial. And that's a good thing. Free and open debate is what makes this country work, and many people around the world risk their lives every day for the liberties we often take for granted.

But as much as we value a healthy debate, we don't let that debate tear us apart.

Perhaps Alaska would have a better chance of leaving the Union if they wrote Putin, and asked him to consider their territory the next time he wants to violate international law. Or better yet, they could just reach out to him more directly, by following Obama’s example and giving him a call.