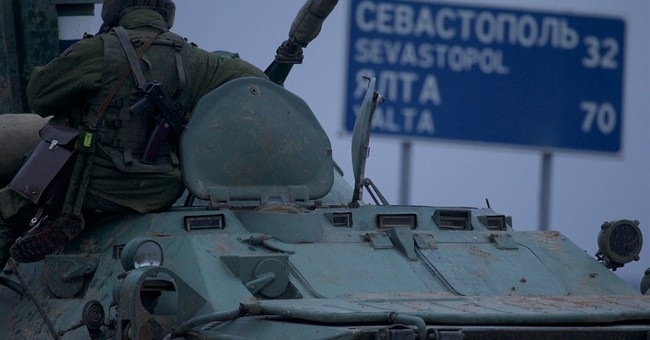 In the wake of President Obama's tepid response to the Russian invasion of Ukraine - the Obama Administration called it an "unplanned arrival" - Republicans pushed for a stronger response.

Sen. Ted Cruz warned that Russian President Vladimir Putin would not take the cautious words of President Obama very seriously - and look into suspending Russia from the World Trade Organization and the United Nations Security Council:

"As the President and his national security team are apparently the last to learn, Putin has scant regard for international norms when they run counter to his goal of re-establishing Soviet-style regional hegemony over unfortunate states like Georgia and Ukraine who have the temerity to want a more free, prosperous future for their people. And Putin is under no illusions that the President’s vague threats mean any more than his infamous ‘red line’ in the Syrian desert.

“If we were serious about standing up to Putin’s power grab, we would immediately suspend Russian membership in the Group of Eight (G8), which should consist of nations that can contribute to a civilized order. And if the Russians persist in this aggressive action, we should look into additional measures such as suspension from the World Trade Organization and even the United Nations Security Council.

“The United States should stand with Ukraine.”

This continues a string of tough talk from Sen. Cruz on Russia and warnings that President Obama is taking the threat of the Russian Bear a little lightly. In January, Cruz said that Putin was "playing chess, and the United States is playing checkers."

Sen. Marco Rubio was more concise and direct, calling Vladimir Putin a tyrant. "The U.S. cannot accept Russian aggression against a neighbor and United Nations member in blatant violation of international law," Rubio said in a statement. "Tyrants like Vladimir Putin may threaten and intimidate, but the clear arc of history favors people's universal desire to be free."

It was only yesterday that American intelligence reportedly assessed that Russia wouldn't invade Ukraine, as The Daily Beast's Eli Lake reported that a U.S. intelligence official concluded that Russian military maneuvers were concerning but "we don't have any reason to think it's more than military exercises."

And, of course, CNN brings us the picture on the ground in Ukraine today: