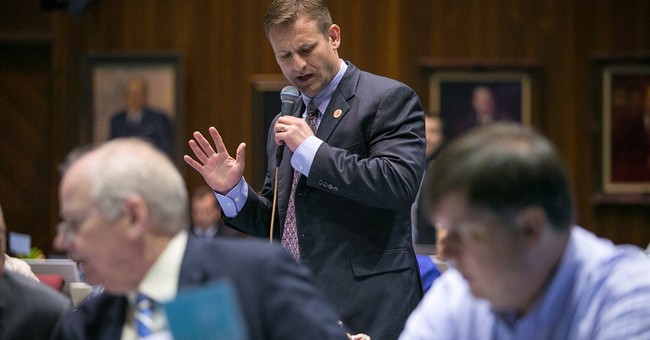 The Arizona Legislature passed a bill that would amend the definition of religious freedom and provide a wider birth of protection for entities that seek to deny service because of a moral conviction.

Under Senate Bill 1062 'exercise of religion' is expanded to include the 'practice or observation of religion.'

It also makes this key rewrite:

This redefinition would be a huge First Amendment victory. Businesses and organizations are usually mute when it comes to religious freedom. This bill would safeguard individuals such as Elaine Huguenin, a photographer who was fined more than $6K after she declined to shoot photographs of a same-sex marriage ceremony in 2006.

It would also protect companies such as Sweet Cakes By Melissa, a Christian-owned bakery in Oregon that was slammed with fines after refusing to bake a wedding cake for a gay couple. The Bureau of Labor and Industries found:

The bakery is not a religious institution under the law and that the business’ policy of refusing to make same-sex wedding cakes represents unlawful discrimination based on sexual orientation.

According to the Greater Phoenix Economic Council the "legislation will likely have profound, negative effects on our business community for years to come." Tough words to swallow considering Sweet Cakes was forced to close after the lawsuit suffocated the business.

The truth is, there are hundreds of photographers and bakeries in any given city. Why force a businesses to compromise its sincere religious beliefs?

Even the Los Angeles Times, a paper thriving in the heart of a gay community, expressed support for allowing "expressive professions" freedom of choice:

The 1st Amendment protects not only the right to express one's own views but also a right not to be compelled to convey someone else's....

Much as we support same-sex marriage and oppose discrimination, we do see a distinction between businesses that provide the same product or service to all comers and those that collaborate in the creation of a personalized message. We acknowledge that drawing that line will sometimes be difficult.

Cathi Herrod of the Center for Arizona Policy President explained:

It's a shame we even need a bill like this in America. But growing hostility against freedom in our nation, and the increasing use of government to threaten and punish its own citizens, has made it necessary.

I urge Governor Brewer to send a clear message to the country that in Arizona, everyone, regardless of their faith, will be protected in Arizona by signing SB 1062.

The clock is ticking. The Senate is expected to officially deliver the bill to Republican Arizona Governor Jan Brewer today, and she will have five days to sign or veto the bill.