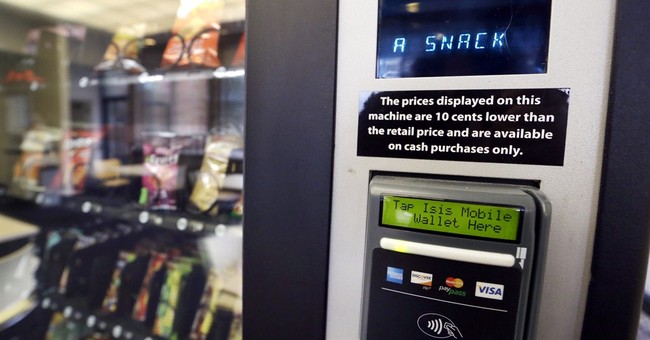 Not even vending machines are outside the scope of Obamacare mandates. Under the bill's new labeling regulations nutrition information must be placed next to each slot of candy bars, chips, peanuts and cracker-jacks.

Around 457 pages into Obamcare, section 4205 stipulates:

"the vending machine operator shall provide a sign in close proximity to each article of food or the selection button that includes a clear and conspicuous statement disclosing the number of calories contained in the article."

This new mandate will cost the vending machine industry an estimated $25.8 million initially and an additional $24 million for every subsequent year.

The rules will apply to about 10,800 companies that operate 20 or more machines. Nearly three quarters of those companies have three or fewer employees, and their profit margin is extremely low, according to the National Automatic Merchandising Association. An initial investment of $2,400 plus $2,200 in annual costs is a lot of money for a small company that only clears a few thousand dollars a year, said Eric Dell, the group's vice president for government affairs.

"The money that would be spent to comply with this — there's no return on the investment," he said.

The mandate could create savings to the health care system if even .02 percent of overweight adults consumed 100 fewer calories a week, according to the Food and Drug Administration. However, not everyone is as optimistic of the mandate's outcomes:

Carol Brennan, who owns Brennan Food Vending Services in Londonderry, said she doesn't yet know how she will handle the regulations, but she doesn't like them. She has five employees servicing hundreds of machines and says she'll be forced to limit the items offered so her employees don't spend too much time updating the calorie counts.

"It is outrageous for us to have to do this on all our equipment," she said.

Brennan also doubts that consumers will benefit from the calorie information.

"How many people have not read a label on a candy bar?" she said. "If you're concerned about it, you've already read it for years."

It is difficult to say whether or not seeing the nutrition information next to a Twinkie will deter someone from buying it. However this regulation will certainly be a burden to businesses forced to pay millions more each year and is evidence of the expansion of the nanny state.