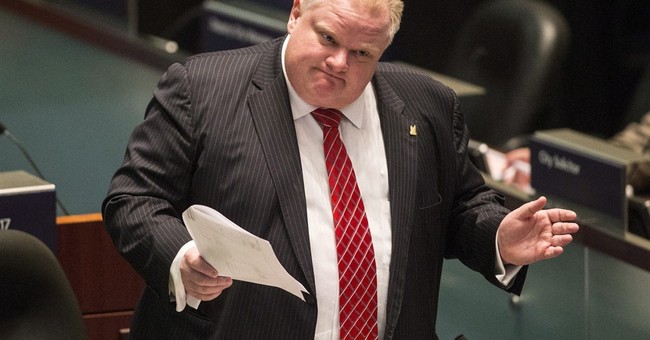 Toronto City Council voted to cut Rob Ford's office budget 60 percent and transferred many powers to Deputy Mayor Norm Kelly. The cancellation apparently had nothing to do with the council's vote — it was due to Ford's own inexperience on television.

Filming took five hours and post production another eight, ABC7 reported, the network blamed it on Ford's inexperience behind a camera.

"It beat our record of 100,000 viewers," but the time and production the show required does not make it a viable option, said Kory Teneycke, vice president of Sun News Network.

The Ford brothers will appear as regular guests on Sun News programming, he said.

The show debuted Monday, the same day the Toronto City Council voted to strip the mayor of most of his powers in a tumultuous meeting during which a charging Ford knocked down one of its members.

Roughly two weeks after Ford admitted to smoking crack cocaine in a "drunken stupor" -- an admission forced by a drug investigation that resulted in extortion charges against a friend -- the mayor said he was done apologizing. He called Monday's vote "a coup d'etat" and compared it to Iraq's invasion of Kuwait in 1990, warning council members, "What goes around, comes around, friends."

So, "Ford Nation" has been knocked off the air - a little like this woman was knocked off her feet.

Maybe what goes around does come around.