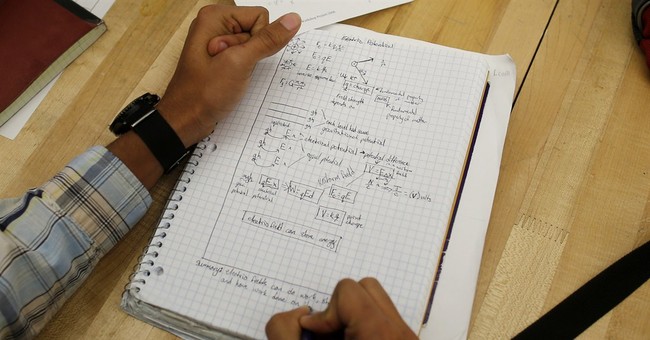 Imagine if the only thing you were taught by Advanced Placement curriculum about Thomas Jefferson, the author of the single most important document in our country’s history, was that he was a wealthy landowner.

CollegeBoard, the issuer of Advanced Placement Exams has been condemned by the Republic National Committee for their newly revised Advanced Placement U.S. History exam and framework for “reflect[ing] a radically revisionist view of American history that emphasizes negative aspects of our nation's history while omitting or minimizing positive aspects."

Some of our most influential historical figures are hardly mentioned, if at all.

George Washington is alluded to only once in the framework and it is in reference to his farewell address. Thomas Jefferson and John Adams are mentioned only in the “Long Essay Questions” section, where they are listed as examples to illustrate the lack of change in the upper class in the pre-Revolution and post-Revolution world.

College Board gave this example in a practice AP essay given by students:

“[A good essay] might note, for example, that the outcome of the American Revolution saw no broad change in the composition of those who dominated the social, political, and economic structure of the former colonies. Those individuals who were wealthy, powerful, and influential before the event continued to possess wealth, power, and influence later. George Washington, John Adams, and Thomas Jefferson could serve as examples.”

This new framework shows U.S. history in a negative light. It also has expanded the curriculum from five to 98 pages, allowing teachers less flexibility and making it harder for them to fulfill their state’s social studies standards.

While the new curriculum may be more “left-leaning,” I have had my own experiences with this issue specifically. Having taken AP US History last year, I experienced first-hand College Board curriculum. Even though the new standards had not yet been applied, I still could see how the most admirable aspects of our country’s history were often downplayed. This also could have been due to my very liberal teacher, who once when someone asked “Was Gerald Ford a Republican?” she replied saying, “Yes, wait what did you say?” After the question was repeated, my teacher said “Oh, I thought you asked if he was a bumpkin… although I can’t say that I would have changed my answer.” Or when we were discussing the 2008 election, she said “Oh well I hope none of you would have voted for Sarah Palin!” Don’t get me wrong, she was a great teacher, but the fact that her perspective was so biased, and the fact that I got a 5/5 on the exam, is indicative of how left-leaning the exam has become.

But that’s nothing compared to the new standards. How shameful and absurd that George Washington and the other founding fathers’ unprecedented and truly revolutionary vision is not highlighted.

While I intend to continue my study of US history in college, for many of those who got a high enough score on the exam, they may never have to take a US history class again. This is a concern shared by Jane Robbins, American Principles President, who said:

“Those who don’t go on to college to take US history in college, this is it. So, if this is the impression they come away with, I’m afraid that we are creating a cynical generation.”

College Board’s new framework and exam for AP US History are set to be implemented in the fall of 2014.