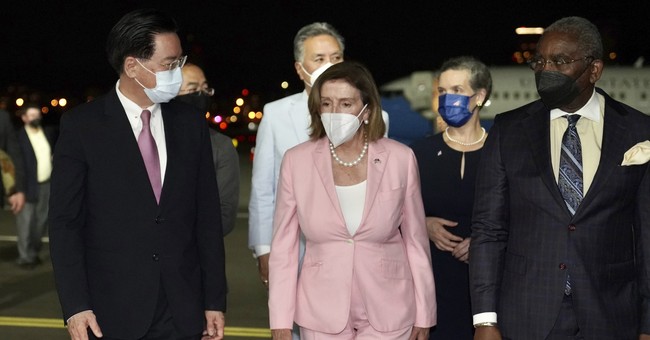 The Democrats are finding themselves in disarray over yet another issue, this one with major foreign policy implications, as it pertains to Taiwan. As Bloomberg reported, the White House is lobbying Senate Democrats to kill a bill that would declare Taiwan as a major non-NATO ally as well as provide $4.5 billion in aid and support its participation in international organization. The bipartisan bill is sponsored by Sens. Bob Menendez (D-NJ) and Lindsey Graham (R-SC).

The report mentions those who take issue with the bill:

Murphy said the Foreign Relations panel is delaying work on the legislation until September and it may be rewritten. The committee had planned to vote on the bill Wednesday. The US has treated Taiwan as a major non-NATO ally since the George W. Bush administration. The bill would formalize that designation.

National Security Council spokeswoman Adrienne Watson said the bill could improve cooperation and coordination with Taiwan, but she confirmed the White House’s reservations on certain aspects, particularly as it addresses the US’s “One China” policy which deems the question of sovereignty over Taiwan as undetermined.

“We do have concerns with elements of this bill which would contradict and undermine the United States government’s longstanding one China policy and contravene the President’s constitutional authorities to determine the United States’ position on the status of Taiwan and to determine the manner of diplomatic communications with representatives of Taiwan,” Watson said in an emailed statement.

The Biden administration considers the legislation counterproductive and that it would interfere with the decades-old approach of “strategic ambiguity” about whether the US military would defend Taiwan against Communist forces, according to the people, who asked for anonymity because the discussions are private.

A Fox News report citing Bloomberg's report noted on Thursday morning that the "White House did not immediately respond to requests for comment from Fox News."

Of course, this is all going on amidst House Speaker Nancy Pelosi's (D-CA) trip to Asia, which included a stop in Taiwan.

While there, as reported by CNN, Pelosi indicated her visit was to make it "unequivocally clear" that the United States would "not abandon" Taiwan.

Speaking alongside President Tisai Ing-wen at the presidential office in Taipei. "Now more than ever, America's solidarity with Taiwan is crucial and that is the message we are bringing here today," she said. She doubled down on how her visit "should be seen as a strong statement that America stands with Taiwan."

I led a Congressional delegation to Taiwan to make crystal clear that America stands with the people of Taiwan – and all those committed to Democracy and human rights.

Check out this video of our historic visit to Taipei. pic.twitter.com/TON6zB3x4s

It's worth pointing to the contrast of how the Biden administration handled Pelosi's trip, which they appeared to try to distance themselves from. Despite Chinese state media threatening to shoot Pelosi's plane out of the sky, the White House would not comment, with White House Press Secretary Karine Jean-Pierre emphasizing to Fox News' Peter Doocy that she was "not going to speak to a hypothetical."

Department of Defense Press Secretary John Kirby refused to say during last week's and this week's press briefings whether or not Pelosi should make the trip. During his Thursday appearance on Fox News' "America's Newsroom," he also refused to concede to Bill Hemmer that the White House tried to talk Pelosi out of the trip, which Hemmer pointed out seemed "pretty obvious." Kirby instead offered "I think we gave her context and information. We gave her an analysis of what it was going to look like, not just in this one stop with all the stops that she's making on this important trip."

For how much Pelosi claims to support Taiwan, it's telling that Kirby made the following comments during Monday's press briefing:

While taking a question from RealClearPolitics' Phil Wegmann, Kirby also dismissively denied there was any "drama," and even accused Wegmann of "manufacturing it with your question."

The bipartisan nature of support for Taiwan truly ought to be emphasized. As Bloomberg also mentioned, Sen. Menendez published an op-ed on Wednesday in The New York Times about supporting Taiwan, not exactly a quiet move. The title is rather cringe-worthy, considering the disunity on the issue, as it reads "This Is How the U.S. Will Stand With Taiwan."

As the senator writes in his piece:

A clear lesson from the war in Ukraine is that authoritarian leaders have been emboldened in recent years by dysfunctional democracies and hesitant international institutions. Accordingly, the United States needs less ambiguity to guide our approach to Taiwan. In today’s world — with Mr. Xi’s China — a robust and credible deterrence to preserve peace and stability across the Taiwan Strait requires clarity in word and deed. President Biden vowed in May to use force to defend Taiwan — the third time he has said so, even though his aides have said the longstanding U.S. policy of strategic ambiguity has not changed.

The moral and strategic case for standing with Taiwan, whose people share our interests and our values, could not be clearer. China is carrying out influence campaigns against Taiwan using cyberattacks and disinformation, deploying propaganda to reinforce its “one China” message, spreading disinformation and conspiracy theories to divide Taiwanese society and make it easier to gain control of the island. This is a plan of attack eerily reminiscent of Mr. Putin’s in Ukraine.

In addition to calling on the Biden administration to do more for China, Menendez promotes his legislation:

Moreover, Beijing’s recent threats over Speaker Nancy Pelosi’s trip to Taiwan were as predictable as they were indicative of Mr. Xi’s truculence. But the United States must be clear: Using her visit as an excuse for performative sound and fury is simply that: a pretext for more aggressive steps that China has been preparing to take anyway. That is why Ms. Pelosi was right in not letting China decide who can and cannot visit Taiwan. The result of Beijing’s bluster should be to stiffen resolve in Taipei, in Washington and across the region. There are many strategies to continue standing up to Chinese aggression; there is clear bipartisan congressional agreement on the importance of acting now to provide the people of Taiwan with the type of support they desperately need.

We saw the warning signs for Ukraine in 2014 and failed to take action that might have deterred further Russian aggression. We cannot afford to repeat that mistake with Taiwan.

That is why I have worked with Senator Lindsey Graham to introduce the bipartisan Taiwan Policy Act of 2022.

The United States and our partners must remain cleareyed as we respond with measured steps during this critical window of opportunity — before China unalterably changes the cross-strait dynamic to its advantage and sets the stage for a possible invasion of Taiwan — to reinvigorate our diplomatic strategy. To work with Taipei to modernize its military to maintain deterrence. To combat Beijing’s political influence and misinformation campaigns. And to develop deeper ties between our two peoples.

As China challenges us across every dimension of national security — militarily, economically and diplomatically and on values — we are laying out a new vision that ensures our country is positioned to defend Taiwan for decades to come. Getting our strategy right is essential to deter and constrain Beijing’s problematic behavior and to encourage Mr. Xi to make different choices from Mr. Putin’s.

The op-ed is not merely cringe-worthy due to the title, but because the lack of a coherent and consistent message from the Democratic Party.

As Leah covered earlier on Thursday, China continues to react to Pelosi's visit to Taiwan, by launching missiles towards the waters near the island, resulting in shipping delays and air traffic delays.