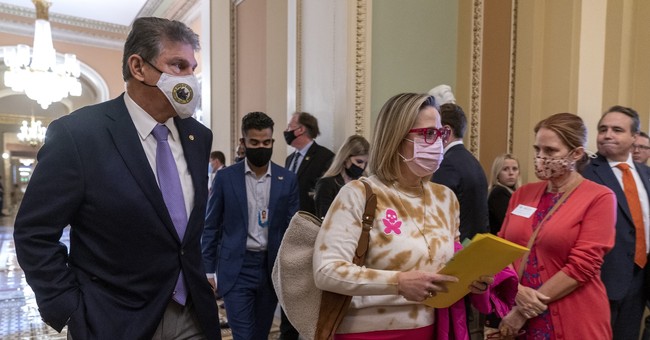 While it was announced last Wednesday that Sen. Joe Manchin (D-WV) made a deal with Senate Majority Leader Chuck Schumer (D-NY) on Build Back Better junior, passing the bill isn't a done deal just yet. It's been rebranded the Inflation Reduction Act of 2022, but it will do no such thing; in fact, it will raise inflation and add to the deficit. It's no longer Sen. Manchin who is the face of opposition, but potentially Sen. Kyrsten Sinema (D-AZ), who, per discussions between her and Manchin, is still reading the bill over and making up her mind.

Manchin after he talked with Sinema. “She’ll make her decision based on the facts. We’re exchanging texts back and forth, and she’s always been that. She’s extremely bright, she works hard, she makes a good decision on facts and I’m relying on that.”

The U.S. Senate isn't the only body that has to pass the bill, though. Vulnerable House Democrats may find themselves wary, too, as Fox News' Aubrie Spady found, especially when it will raise taxes by billions of dollars, including for middle-class Americans.

Thus, the misnamed bill involves a broken promise from President Joe Biden not to raise taxes on anyone making over $400,000, and also involves flip-flopping Sen. Manchin, who previously said he couldn't raise taxes during a recession.

None of them provided a response to Fox News.

The 20 Democrats in question are all particularly vulnerable, as we quickly approach the November midterm elections, where Republicans are predicted to at least take back control of the House and potentially the Senate.

"If Democrats believe their tax and spending plan is a win for Americans, why don’t they want their constituents to know that they support it,"  said Cally Perkins, the press secretary for the Congressional Leadership Fund, about their silence. "Every House Democrat needs to answer if they’ll vote to double down on more of the same reckless spending that set off inflation to begin with."

As it turns out, Sen. Sinema is also facing pressure from her Republican colleagues as well. Senate Minority Whip June Thune (R-SD) had also chimed in earlier in the week when it comes to Sen. Sinema's fierce independence, and how it's expected she'll decide for herself on the bill.

According to Aris Foley from The Hill, Republicans plan to not only emphasize how the bill will increase inflation and raise taxes, but offer amendments:

Republicans are strategizing and laying the groundwork to make things as difficult for Democrats as possible, and they are reaching out to Sen. Kyrsten Sinema (D-Ariz.), who has yet to back the deal.

“This bill shouldn’t pass and become law. It’s going to cause a lot of pain for the American people,” Sen. John Barrasso (Wyo.), the No. 3 Republican in the upper chamber, told The Hill on Tuesday while hinting at the GOP efforts to slow things down. “I don’t care about what pain it may cause members of the Democratic Party.”

Republican leaders are anticipating filing hundreds of amendments to the measure, known as the Inflation Reduction Act. The amendments will touch on immigration, health care and taxes as the Senate buckles up for a marathon voting session known as a vote-a-rama in the days ahead.

The vote-a-rama is just one of several hurdles that Senate Democrats must clear to use the complex budget reconciliation process to bypass a filibuster.

During the typically lengthy procedure, the minority is permitted to offer amendments to the legislation before leaders bring the measure to the Senate floor for a vote. This will allow Republicans to make last-minute changes to the partisan plan, if any of the amendments are approved. They can also make Democrats take tough political votes.

But as Democrats plow forward with the plan, Republicans have been on offense, arguing the bill will contribute to higher taxes and add to inflation, as rising prices have surged to the top of voters’ minds in recent months.

“If you look at all the analysis that’s been done, the distributional analysis and everything else shows that this hits a lot of lower-income Americans, contrary to what the Democrats have said,” Thune charged on Monday.

Sen. Joe Manchin (D-W.Va.), who helped craft the bill along with Senate Majority Leader Charles Schumer (D-N.Y.), has said he is reaching out to Sinema amid concerns about her support for the overall bill.

But Republicans are pitching her too.

“We’re going to argue to her, and everybody else for that matter, that it’s just that this is a bad time with inflation and a wobbly economy to be raising taxes,” Thune said.

According to CNN's Morgan Rimmer, Sinema responded "taking my time," when asked if she supports the bill, which, even if she ultimately does, could affect the Democrats' timeline. Democratic leaders want to pass the bill by this weekend.

“Taking my time,” Kyrsten Sinema says when asked about the reconciliation bill that Dem leaders want to pass by this weekend, per @morgan_rimmer. She has not commented on the bill since it was released, and her office says she’s waiting for the parliamentarian ruling

So when Democrats and the mainstream media try to claim a win for Biden, don't be too sure just yet.