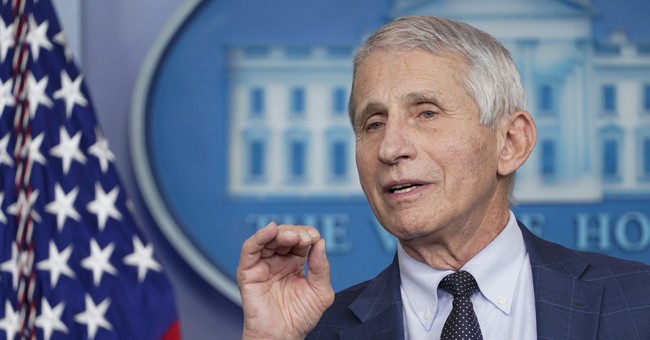 In multiple interviews, Dr. Anthony Fauci has weighed in on the Monday ruling from United States District Judge Kathryn Kimball Mizelle, which struck down the travel mask mandate. President Joe Biden's Department of Justice (DOJ) has decided to appeal Judge Mizelle's ruling. The Centers for Disease Control (CDC) has also told the DOJ to reinstate the mandate.

Speaking with CBS News' Robert Costa, Dr. Fauci lamented that a judge would dare to rule on the mask mandate as it applied to the CDC overstepping its authority, including when it comes to the Administrative Procedure Act (APA). Costa had asked Fauci "does the CDC, with all respect, have any power anymore if one judge can say 'no thanks' to its mandates," expressing a rather narrow-minded oversimplification of the issue.

Fauci emphasized that they were "worried," as he noted "we're worried about a precedent that would be a dangerous precedent. The CDC has the capability, through a large number of trained epidemiologists and scientists, to be able to make projections and make recommendations. Far more than a judge with no experience in public health," Fauci claimed.

Dr. Anthony Fauci says the CDC has the capabilities through a large number of trained epidemiologists and scientists to be able to make projections and make recommendations on masks for the public. Far more than a judge. pic.twitter.com/mAlErtKK18

A CBS News report by Alexander Tin also highlighted how Fauci expressed that healthy people would weigh the risks of not wearing a mask, though:

Fauci said he had urged the president to follow the CDC's recommendations, and for now the agency has continued to urge all travelers to wear masks. Fauci said he personally planned to don a highly-protective N95 mask when flying.

But Fauci also acknowledged that Americans would "have to make their own individual choice" around the risks of skipping masks while traveling.

"There are going to be plenty of people who are 25 years old, healthy, and say, 'no, as far as I'm concerned, I don't like the discomfort of a mask,'" said Fauci.

It's worth reminding Fauci and his ilk that the beauty of doing away with the mask mandate is that people would have "their own individual choice," which includes choosing to mask.

Fauci also spoke with CNN's Kasie Hunt, where he once more emphasized his displeasure with the ruling, saying he was "both surprised and disappointed," which again came down to the authority of the CDC. As Fauci sees it, "those types of things really are the purview of the CDC" because "this is a public health issue, and for a court to come in, and if you look at the rationale for that, it really is not particularly firm," he said with a sort of nervous giggle.

"We are concerned about that, about courts getting involved in things that are unequivocally public health decisions," he continued, in a more serious tone. "I mean this is a CDC issue. It should not have been a court issue."

After Fauci himself acknowledged that the rise in cases of this new variant may not lead to increased hospitalizations, he claimed that "it was perfectly logical for the CDC to say 'wait a minute, we were planning on ending this mandate on a certain date, let's wait a period of time until May 3" and also tried to convince that that "was a very sound public health decision."

He continued to complain about Judge Mizelle's ruling, saying that "for a court to come in, and interfere in that, is really unfortunate. It's unfortunate because it's against public health principles, number one, and number two is because that's no place for the courts to do that, this is a CDC decision, and that's very bad precedent when you have courts making a decision and looking at what the basis of the decision, it was not sound."

What? Is the CDC accountable to no one? Also, when it comes to waiting until "a certain date," plenty of us remember the powers that be at the time telling us, over two years ago now, that we just needed two weeks to stop the spread.

WATCH: Dr. Fauci tells me on #TheSourceKasie??????? "This is a CDC issue, it should not have been a court issue." @CNN pic.twitter.com/rZZyHnFqJ5

Such exchanges certainly highlight an entitlement that Dr. Fauci, the CDC, and the Biden administration all have when it comes to their authority in handling the Wuhan coronavirus. It's all on these members of the mainstream media for throwing Biden such softball questions.

These remarks came after Dr. Fauci just recently, during an appearance on ABC News' "This Week" acknowledged that "this is not going to be eradicated ... Each individual is going to have to make their [risk] calculation."

Fauci has hardly been the only one to denigrate Judge Mizelle though, with other liberals going after her, including to do with her age and her qualifications, as Spencer and our friends at Twitchy highlighted.

When it comes to Fauci's sense of entitlement, he may need to be reminded that the courts, including the U.S. Supreme Court, have found that the CDC overstepped its authority before when it comes to the pandemic. Last August, in a 6-3 decision, the Court ruled against the CDC's eviction moratorium, which even President Joe Biden had acknowledged was likely unconstitutional, though he issued it regardless.

"Fauci" has been trending over Twitter on Thursday night.