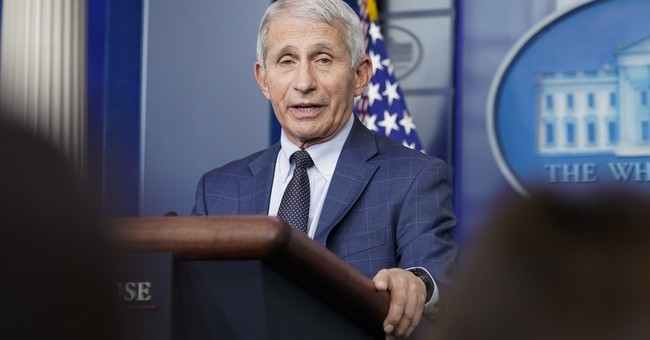 Dr. Anthony Fauci, Chief White House medical adviser and director of the National Institute of Allergy and Infectious Diseases, appeared to make yet another pivot Sunday in his ever-changing approach to how the United States should approach the Covid-19 pandemic.

After a few weeks of laying low, Fauci's appearances on major network shows have started to tick up as the BA.2 subvariant, a more transmissible but less lethal version than others we've seen, spreads across parts of the country, particularly the northeast.

During an appearance on ABC's "This Week," guest anchor Jonathan Karl asked Fauci about an op-ed written by Dr. Leana Wen, a CNN medical analyst whose shift over to some positions espoused by Team Reality has been of particular interest given her tyrannical stand on vaccine mandates in the past.

After pointing out this solid quote from Wen's piece:

At this point in the pandemic, we have to accept that infections will keep occurring. During the winter omicron surge, almost half of Americans contracted the Coronavirus. The new omicron subvariant BA.2 is even more contagious. The price to pay to avoid Coronavirus infection is extremely high. Some Americans might choose to continue to pay that price, but I suspect most won't.

Karl asked: "At this point, are we at the point where we have to accept there is going to be risk, there are going to be continued infections, and the cases, thanks to the prevalence of the vaccine, won’t be as serious, we can kind of get back to normal lives knowing that there's a risk out there?"

Here's Dr. Fauci agreeing with Dr. Leana Wen and saying what so many have been saying for years:

"This is not going to be eradicated ... Each individual is going to have to make their [risk] calculation ... We're going to have to live with some degree of virus in the community." pic.twitter.com/iapD3VuhM1

"You know, Jon, I think Dr. Wen articulated that pretty well," Fauci responded. "There will be a level of infection. This is not going to be eradicated and it’s not going to be eliminated, and what’s gonna happen is we’re going to see that each individual is going to have to make their calculation of the amount of risk that they want to take ..."
Fauci pointed out, as Team Reality proponents have been stressing for more than two years, that there are individual risk factors such as age, health status, and caring for high-risk people that should drive individual risk assessments going forward.

"So we’re at that point where in many respects she’s correct," he continued. "That we’re going to have to live with some degree of virus in the community."

Is this a temporary moment of sanity that will be undone by yet another reminder that Big Government could at any point return to mandating useless masks to "stop the spread" of an unstoppable virus? Probably, which is why we should always take what this man says with a serious grain of salt.

Meanwhile, they're still practicing "zero-Covid" over in Shanghai, China. If you haven't yet, you should read up a little on how that's going, then thank God for Ron DeSantis and others like him.