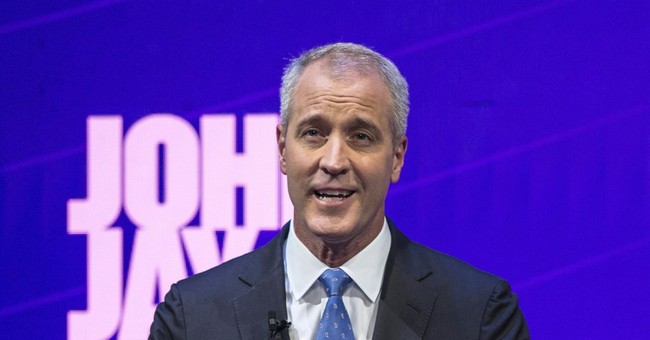 When Frank R. James allegedly committed terrorism on a mass transportation system on Tuesday at a Brooklyn subway station and was arrested the following day, there were concerns he'd be set free, considering it's New York, and the state's so-called bail reform is screwed up. Even in New York, though, a judge has ordered James to remain in federal custody without bail. The terroristic activity led to even New York Democrats who have previously supported such lawless so-called bail reform to make statements about the state's system, including Rep. Sean Patrick Maloney. The statement came in a form of a tweet from Rep. Maloney's official account, but he also currently holds the thankless job of chairing the DCCC as Democrats are likely about to lose control of the U.S. House of Representatives, and lose it badly.

No one can say the old system was working and didn’t need reform. But, it’s essential that we keep dangerous people off the streets. These changes are an important and necessary step.

While the congressman does acknowledge that changing New York's bail law is "an important and necessary step," to call the current system in place "reform," implying it was a needed one, is certainly a way of looking at the meaning of the word.

As I covered earlier in the week, before the subway station attack, crime is up in New York City compared to last year. It's thanks to repeat offenders, and the soft-on-crime agenda from progressive DA Alvin Bragg, who just took office earlier this year, certainly hasn't helped.

Further, Rep. Maloney's tweet from Thursday morning isn't all that he's said on bail reform. At a New York Democratic Attorney General debate on August 22, 2018, Maloney called ending cash bail a "top priority." Maloney was running for the position won by and currently held by Letitia James, who herself outlined her priorities for ending cashless bail, claiming the system at the time was "unjust" and "criminalizes poverty."

Cally Perkins, the press secretary for the Congressional Leadership Fund (CLF), a Super PAC dedicated to electing Republicans to the House, offered that Maloney is hoping voters will forget his previous stance.

"Sean Patrick Maloney completely supported getting rid of bail which allowed criminals to walk free and violent crime to skyrocket," she said. "Now with an approaching election, Maloney hopes voters will forget how he worked to set criminals free and put New Yorkers at risk."

A poll released on March 28, 2022 by Siena found that 56 percent of respondents--New York State registered voters--thought that the bail reform law was "bad for New York," and 64 percent say it resulted in increased crime.

Cashless bail was implemented in 2020. Democrats appear to be finally coming around, but not after they pushed for such so-called reform which led to repeat offenders being able to commit more crimes after being quickly returned back on the streets without consequence. Attorney General James herself has in the past blamed surge in crime on other factors rather than acknowledge the folly of cashless bail that she championed.

This isn't the only comment from New York Democratic lawmakers about crime that could come back to haunt them. As Kyle Morris reported for Fox News on Tuesday night, state and Congressional level Democrats, including Reps. Alexandria Ocasio-Cortez and Jerry Nadler, as well as then Rep. José Serrano, sent a letter to then Gov. Andrew Cuomo expressing their opposition to a 2019 proposal from the MTA that would place an additional 500 police officers at subway stations.

Punishing the poor does not create a safer environment. Instead it threatens the very foundation of our community. That is why my New York colleagues and I wrote a letter to @NYGovCuomo asking him to help put an end to MTA's dangerous policing policy. Check it out here: pic.twitter.com/g1AOWHA7Lh

"The subway system is now safer than before," the letter in part wrote. Predictably, the letter and a tweet from AOC claimed that the proposal was "Punishing the poor."

It also happened that the suspect was questioned by the FBI in 2019, though James had been cleared.