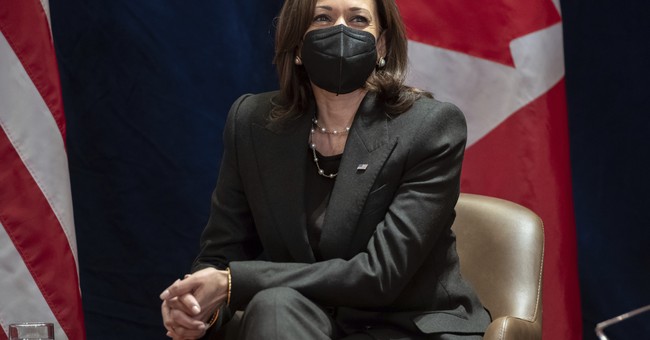 On Friday, "The ReidOut" featured an interview between Joy Reid and Vice President Kamala Harris. During her questioning of the vice president, Reid referenced the Russian invasion of Ukraine, a topical issue, to be sure. She repeatedly did so in the context of raising concerns about January 6 and concerns about the 2024 presidential election, though.

Reid asked the vice president about President Joe Biden's remarks in Warsaw last weekend, when he called for regime change in Russia. "For God’s sake, this man cannot remain in power," the president said about Vladimir Putin. The White House, almost immediately, walked back Biden's remarks. Harris herself emphasized regime change is not the administration's position.

It was quite the noticeable segue as Reid went from asking about foreign threats to what the Democratic Party and their allies in the mainstream media believe to be domestic threats.

"Let's talk about our democracy here, because we're struggling with our democracy as well," Reid also broached with Harris. "As we all know, there was an insurrection, an attempted coup. I don't think there's any other way to describe it that took place last year," Reid said, speaking about January 6.

"And as we get more information about what happened and who was behind it, we're finding out there were members of Congress who were complicit, there were United States senators. You're the President of the Senate, as Vice President of the United States, what do you think should be the consequences for people like Ted Cruz, people like Josh Hawley, who are now being named, as we learn more about those who were actually putting together the plan to overthrow our election?"

After a long pause, Harris made it abundantly clear she was "gonna make the connection first to the previous discussion on this one," and complimented Reid for how she was "absolutely spot on from my perspective that this is about our democracy, an attempt to weaken the strength of it, but also the legitimacy of it. There are foreign actors that try to do it, and then we have domestic threats. And that's part of what we witnessed on January 6, and there needs to be, of course, consequence for that, so that is occurring in terms of the process that is about seeking the evidence about what actually happened and who are the bad actors, because of course, yes, they should pay a consequence, there should be accountability."

As is usually the case with Harris' interviews, she used a whole lot of words to not even say all that much.

"In terms of elected leaders, to the extent that they were complicit in a crime, of course there should be some kind of, um, response to that. But also there should be, I think, a continuing discussion about the fact that what happened on January 6 was a concerted attempt to undermine the integrity of our elections system, to suggest that in any way it lacked legitimacy. And that plays right into the hands of all of those who would attempt to say America does not live its principles," Harris went on to say. "And we have to all stand up and be clear that no, that does not reflect the majority of us. The majority of us believe in free and fair elections, the majority of us believe in the integrity of this process, the majority of us will fight for attacks against it, which are both as it relates to what happened on January 6 but also what is happening around the country in terms of legislation that is being passed to make it more difficult for people to vote. All of that needs to happen."

The vice president shared "I believe that we are stronger than any of these attempts to undermine us as a nation in terms of our democracy. But I do believe our democracy is being tested." Citing her previous role as a senator and serving on the Senate Intelligence Committee, Harris resurrected the claims that the 2016 election was influenced by Russian interference, using January 6 as another example of "concerted efforts to undermine our elections process."

Reid also referenced what concerns European countries may have as it pertains to American elections. This was specifically to do with how "it may be difficult for our allies to trust that our democracy will hold if a former president can participate in and foment an attempted coup in this country, and can walk away from it, and in this country right now Republicans all across the country are severely restricting the right to vote, severely undermining access to the ballot."

"Doesn't that undermine the case that you need to make and that the president needs to make about democracy, about American democracy," Reid asked.

Harris affirmed that these were "attacks on our democratic systems from within," which she emphasized "was not new." She went on to call for Congress to pass so-called voting "protections," which have failed and in reality would amount to the federal takeover of elections.

The vice president also claimed that such voter integrity laws have passed because it "scared some folks" that a record-amount of people voted in 2020. "So now they are in the process of trying to put in place laws around various states in our country to make it more difficult to vote, with the expectation and intention that if you make it more difficult to vote, certain people won't vote."

The argument in favor of such legislation that Reid and Harris demonize, however, is that it is not harder to vote, but rather it is easier to vote and harder to cheat.

Reid and Harris are hardly the only figures on the Left to tie in the events from January 6 with election integrity laws being considered and passed by duly-elected officials. A January 1 editorial from The New York Times, nauseatingly claimed that "Every Day is Jan. 6 Now."

Senate Majority Leader Chuck Schumer (D-NY) also made the comparison in a letter to colleagues notifying them that the U.S. Senate would consider the legislation Harris referenced to. He was even willing to nuke the filibuster to get it passed, though both the legislation and efforts to get rid of the filibuster failed in January.

Although the interview aired on April Fool's Day, it did not appear to be a joke.

Things are so bad for Veep that her team was concerned about an interview with *Joy Reid* and “hitting her stride” means not causing days of embarrassing coverage. pic.twitter.com/qEgrEuDylc

As bad as the interview was, it could have been worse, though.