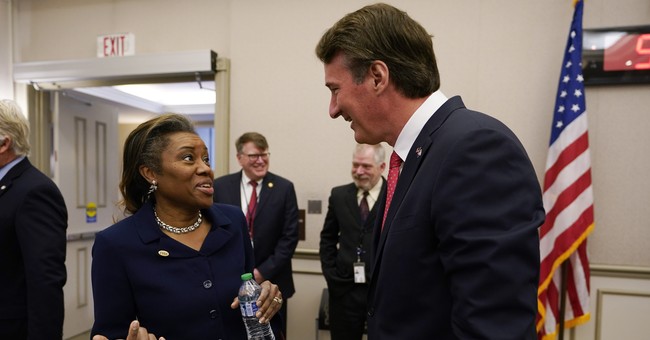 Gov. Glenn Youngkin (R-VA) on Wednesday declared that February 23, 2022 was "Winsome Earle-Sears Day" in Virginia, in celebration of Virginia's lieutenant governor, who is the commonwealth's first female, Black female, and female veteran to hold statewide office.

The rest of the declarations also mention other biographical information about Lt. Gov. Sears and her accomplishments, as "she has served our nation in the United States Marine Corps, as a Presidential appointee to the United States Census Bureau, a distinguished member of the Advisory Committee on Women Veterans to the United States Secretary of Veterans Affairs, and as Vice President of the Virginia State Board of Education."

A tweet from Gov. Youngkin's account also noted that it was during a Black History Month celebration.

Last night, during a #BlackHistoryMonth celebration, Virginia’s First Lady and I were honored to recognize February 23rd as @WinsomeSears Day to highlight her historic election as the first Black woman in Virginia to win statewide. pic.twitter.com/QFNez2SVgn

Despite such genuine accomplishments and the historic nature of Lt. Gov Sears holding the office, an account known as Blue Virginia attacked the proclamation over Twitter as being "Beyond parody."

The Twitter account only just recently allowed for replies, which were previously restricted. While many replies showed more loathing for the lieutenant governor, others shared their displeasure.

Why does @bluevirginia hate black women? Also, did this recognition effect you or anyone else in the Commonwealth? #petty

Speak for yourself. I’m a Virginian and I’m not embarrassed by it. Also, you probably didn’t even know it existed until you saw this tweet. Also, why do you not want to celebrate the accomplishments of our first Lt Gov who is a black female. Are you a racist?

you guys hate Youngkin so much that even when he celebrates black women you criticize it. lol get a grip.

you guys hate Youngkin so much that even when he celebrates black women you criticize it. lol get a grip.

If a democrat did this you would eat it up. Spare me. You’re grasping at straws. No one cares. TF is wrong with you people?

The first Black Female to be Lieutenant Governor in Virginia is a Republican. Consequently, hey @vademocrats your racism is showing. https://t.co/DE9zlnthxc

This is hardly the only time the Left has gone after Sears because she does not fit their brand of politics. MSNBC's hosts such as the racist race-baiting Tiffany Cross and Joy Reid were particularly relentless in their attacks of Sears, particularly shortly after she got elected last November.

Had she been elected, @HalaAyala would likely not have had the same priorities, but I’d still recognize the historic nature of it. She had the totally awesome response, too, to Winsome being elected and I wish if her own opponent could be happy for her, others would too! pic.twitter.com/LNkLOrqKT6

For what it's worth, Lt. Gov. Sears beat out another woman of color, Del. Hala Ayala, a Democrat who had much kinder things to say about her opponent.