While Schools Across the Country Get Rid of Mask Mandates, Fauci Claims It's 'Risky' 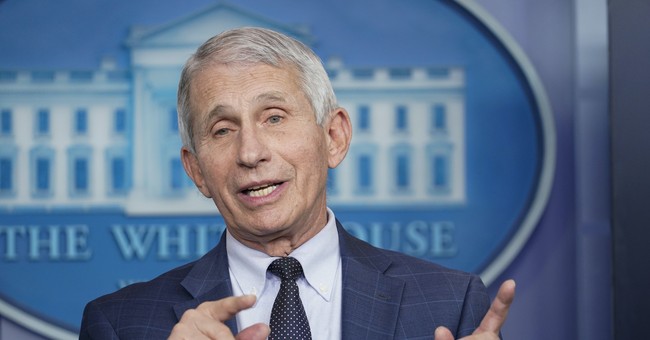 The tide is turning as schools across the country are empowering parents to make the decision of whether their children will wear masks in the classroom, rather than mandating them. This includes Virginia, where Gov. Glenn Youngkin (R) on Wednesday signed SB 739, which includes a provision on optional masking. Even more liberal states, such as New Jersey, are lifting their school mask mandates. Yet Dr. Anthony Fauci, medical director for the NIAID who serves as President Joe Biden's chief medical advisor, said it was "risky" in a clip that CNN aired on Thursday morning.

The comments came during a Wednesday night conversation moderated by Chuck Todd that occurred between Fauci, and Dr. Francis Collins, who until late last year had been the head of the NIH. Fauci and Collins were awarded the 2022 Elliot L. Richardson Prize by the National Academy of Public Administration (NAPA).

Despite science, Dr. Fauci claims “it is risky” to stop forcing kids to wear facemasks

"It’s understandable why people want to take masks off the kids. But, right now, given the level of activity that we have, it is risky.” pic.twitter.com/K3mLDna2UA

A question from the audience referenced lifting mask mandates for children and the effect that that would have. Todd himself expressed concern that we would ultimately come to claim that the lifting of mandates had happened too soon.

Fauci shared that the Centers for Disease Control (CDC) has determined that "given that there is so much transmission going on right now, it is really not prudent to pull masks off of children." He went on to acknowledge, though, that "we could get lucky, because the trajectory is going way down and it may very well be that if you take masks off the kids in the next week or so it's going to keep going down." Fauci also conceded "it's understandable why people want to take masks off the kids," but went on to warn that "right now, given the level of activity that we have, it is risky," a point he emphasized, that could lead to "an increase in infections."

Another argument for lifting mask mandates for children, which Fauci himself also acknowledged, is that children are less likely to contract a severe cause of the coronavirus as an adult or an elderly person especially would.

In that answer, though, Fauci failed to discuss the other harms children have faced, which pertains to how they have suffered socially and emotionally as a result of lockdowns. Further, as Leah reported earlier this month, a Johns Hopkins study found that lockdowns had "little to no effect" on mortality," and "only reduced COVID-19 mortality by .2% on average."

Parents and speech therapists have also reported that they are seeing speech delays in children due to masks, especially for those who have special needs and who are deaf.

Fauci himself had also said earlier during the Wednesday night conversation that "the time will come" when there are such low rates of the coronavirus, "which is the best we can hope for," since we cannot expect to eradicate it, and that it will not be "disrupting" society.

Headlines also highlighted comments Fauci made in an interview with Reuters, which is that it's time where  "you've got to start inching towards that," when it comes to getting back to normal.

What could be more normal than letting parents make their own decisions about whether or not their children will have to wear masks to school?