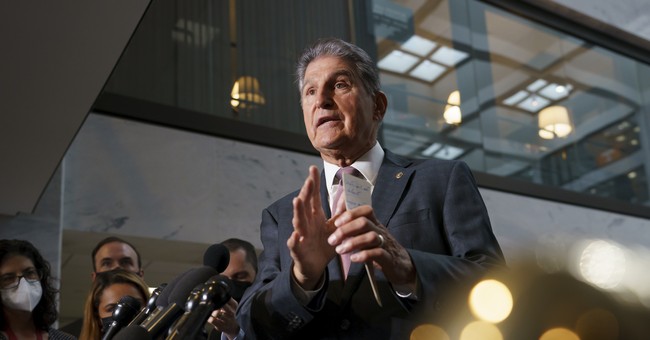 Build Back Better may be dead, for now, but Democrats are so desperate for a win that they're seeking to bring it back to a point where Sen. Joe Manchin (D-WV) may be able to support the reconciliation spending bill. As Naomi Jagoda reported for The Hill on Thursday, "Democrats look to scale back Biden bill to get it passed."

Manchin's issues with the bill have indeed revolved around cost. The House last month passed a version of the bill that was approximately $2 trillion. Sen. Manchin has floated numbers around $1.5 trillion as something he would accept.

Specific parts of the bill that were problematic for Manchin included child tax credit and paid family leave, as he was concerned that these entitlement programs could be abused or would add too much to the deficit.

A score from the Congressional Budget Office (CBO) laid out how Build Back Better would add $3 trillion to the deficit from 2022 to 2031 if those programs were made permanent. Manchin was reportedly "stunned," Leah highlighted.

As Jagoda's reporting detailed, a way to get Manchin on board could be scaling back some of these programs:

Democratic lawmakers, lobbyists and experts at think tanks believe Manchin might be won over if the bill is revised to include fewer programs for a longer period of time.

“That is the way forward here,” said Ben Ritz, director of the Center for Funding America’s Future at the Progressive Policy Institute, who has advocated for a bill with fewer items.

“Most of the party is starting to come around to that,” Ritz added.

“To get someone like Manchin, a Democrat representing a conservative state, to a point where they can support something, [Democrats] started off on the wrong foot about letting the bill get too big about too many things,” said Tucker Shumack, a principal at Ogilvy Government Relations who previously served as an aide to former moderate Sen. Olympia Snowe (R-Maine).

Jorge Castro, co-lead of the tax-policy practice at Miller & Chevalier and a former aide to former West Virginia Democratic Sen. Jay Rockefeller (D), said that a more focused bill could help Democrats counter Republican attacks that the bill is a grab-bag of spending.

“I think it definitely helps from a messaging perspective,” he said.

Some moderate Democrats have long called for the Build Back Better Act to include fewer items for a longer time period, and are emphasizing this idea in the wake of Manchin’s recent comments.

It’s not certain exactly which items from the House-passed bill would end up in a narrower bill, and exactly which would be left out.

As a pro-life Democrat, Manchin has also insisted that Hyde Amendment protections be included in the bill in order for him to support it. The House, however, passed a version that purposefully excluded Hyde. Without Hyde, which has passed every year since 1976 with bipartisan support, Americans will be forced to pay for elective abortions with their tax dollars.

There's another potential sticking point, though, which does not have to do with policy matters, and which Jagoda did not mention. It's worth pointing out that Manchin and the entire state of West Virginia have been smeared, and not just from tone deaf celebrities such as Better Midler.

As Townhall has been covering, the White House has also been not exactly helping their case when it comes to angry statements, going against Manchin's wishes in mentioning the senator by name, and even spreading lies.

Manchin addressed the situation during a Monday interview with "Talkline's" Hoppy Kercheval.

"They figured, ‘Surely to God we can move one person. Surely, we can badger and beat one person up. Surely we can get enough protesters to make that person uncomfortable enough they’ll just say, ‘Okay, I’ll vote for anything just quit,'" Manchin offered. "Guess what?" Manchin continued. "I’m from West Virginia. I’m not from where they’re from where you can beat the living crap out and people and they’ll be submissive."

Proving to be the better person, Manchin had also said "I’m not blaming anybody. I knew where they were and I knew what they could and could not do."

It's entirely possible that Democrats may have killed Build Back Better with their smears against someone who is, at least for now, still one of their own.