Dr. Oz Continues to Cause Confusion Over His Abortion Stance, Can't Definitively Say When Life Begins 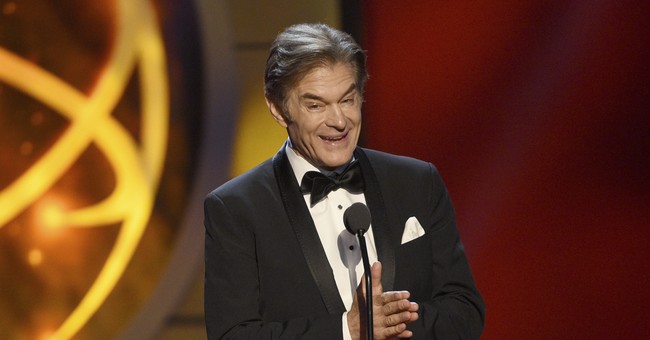 "Life begins at conception. Period. I'm proud to have been rated Pro-Life by the Pennsylvania Pro-Life Federation and LifePac in 2018, and I will always stand up for the most vulnerable among us, the unborn," said Bartos. "This is Pennsylvania, not Hollywood. Real Conservative values don't come from talking points on a teleprompter. In Pennsylvania, we value saying what you mean and meaning what you say."

He also tweeted about the interview.

Life begins at conception. This is what happens when your so-called "values" end at the teleprompter. https://t.co/r0X4hNTf1L

Last week, Kurt and I both highlighted concerning positions Dr. Mehmet Oz has taken on issues, including and especially when it comes to abortion. While Dr. Oz seems to favor liberal positions, he's running as a Republican in the crowded Pennsylvania primary to replace outgoing Republican Sen. Pat Toomey who will not seek re-election in 2022. Dr. Oz doubled down on his abortion stance during a Wednesday night interview on "Fox News Primetime," which can now be summed up with even more certainty that he has trouble definitively acknowledging that life begins at conception.

Dr. Oz refuses to say whether or not life begins at conception pic.twitter.com/2oqh8u8Wcg

"What is your position as both a doctor and a senatorial candidate on when life begins," host Will Cain asked. "When should we draw the line on when abortion is legal?"

"As a doctor, I appreciate the sanctity of life. And for that reason I'm strongly pro-life, with the three exceptions I've mentioned," Dr. Oz began by answering, referencing exceptions of health of the mother, and rape and incest, which he had brought up earlier in the segment. "That's how I would vote."

"And when does that life begin," Cain prompted once more.

"You know, I get it. If I'm pro-life, it's a decision that comes back to the sanctity of when you think life does begin. And I believe it begins when you're in the mother's womb.

"When you're in the mother's womb? But that carries you all the way up to nine months of pregnancy," Cain clarified.

"No, of course not, life's already started when you're in your mother's womb," Dr. Oz said, though he did also appear to revert back to what seemed to be a previous preference of his, which is to not address the issue at all. "But it's a rat hole to get trapped in the different ways to talking about it," he continued.

It's worth stressing that this is in Dr. Oz's own words, or rather, lack thereof.

While Dr. Oz could not definitively say the words of "life begins at conception," he did pivot to talking about the issue of abortion laws in this country.  "We need, as a nation, to make sure the constitution is appropriately followed and people like me, and you may be in the same camp, who are pro-life, have our feelings respected. And this is something that should not be taken away from us by a judiciary legislating from the bench."

Dr. Oz was likely referring to Roe v. Wade and its companion case of Doe v. Bolton, which, when handed down in 1973 by the U.S. Supreme Court, legalized abortion on demand in all 50 states. The decisions also made it difficult for states to pass pro-life legislation, especially in the first trimesters, but even in the final third trimester.

"Yeah, but that's also something that's going to have to be legislated and that answer is going to have to be given specifically," Cain said before giving his closing remarks on the segment. Cain shared "I hear you on Big Tech censorship. I hear on medical tyranny when it comes to this censorship," but gave Dr. Oz particular pushback on the abortion issue and his confusing stance.

In a lengthier clip of the segment, Cain shared "there are some who are concerned, are you truly a principled conservative," with one issue being abortion.

Share this on Facebook
Tweet
The Russian Collusion Circus Suffers Another Massive Blow in First Durham Trial
Matt Vespa
Is This the Most Embarrassing Anti-Gun Op-Ed Ever Written?
Matt Vespa
Former Minister of Truth Blames Disinformation for Pushing Her Out of DHS
Julio Rosas
Paul Responds to McConnell's Dig at Him Over Ukraine Vote