Letitia James Is NOT Running for Governor After All 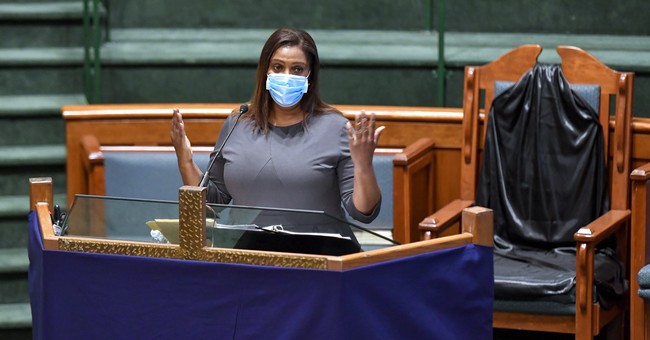 Less than a month and a half after announcing her run for governor, New York State Attorney General Letitia James announced she is not running after all. The announcement came Thursday over Twitter.

I have come to the conclusion that I must continue my work as attorney general.

There are a number of important investigations and cases that are underway, and I intend to finish the job.

I am running for re-election to complete the work New Yorkers elected me to do.

Instead, James will be running for re-election as attorney general. A report released in August from her office revealed that then-Gov. Andrew Cuomo had engaged in sexual harassment in the workplace, in violation of state and federal law. Cuomo ultimately resigned.

As James was tweeting that she would not run for governor, Business Insider's Jake Lahut tweeted that he "had gotten a tip" that a personal attorney of James had advised her not to run.

I had gotten a tip a week or so ahead of James announcing that a personal attorney of hers advised her not to run for governor, but then she ended up running and I thought maybe something got lost in translation. https://t.co/45nL26hZ2j

Guess that sucks for all of the AG hopefuls out there

James' announcement that she was running happened to come the day after it was also reported that a misdemeanor sex crime charge was filed against Cuomo. While Cuomo was supposed to appear in court in November, his arraignment was delayed until January 7, as the complaint was found to be "potentially defective" and could ultimately be thrown out.

This time, James' announcement that she is not running comes less than a week after Andrew Cuomo's younger brother, Chris Cuomo, was fired from his job at CNN. James' investigation also found that the younger Cuomo used his media connections to try to dig up information about the multiple women who accused his older brother of sexual misconduct.

Christmas came early for Jumaane Williams w/ Letitia James out of the race for NY Governor. The attacks on wallets, safety, freedom & education have been relentless & causing more NYers to hit their breaking point. I look forward to ending 1-party rule in Nov 2022. My statement?? pic.twitter.com/S2TcOjRWy6

Rep. Lee Zeldin is running as a Republican. In a recently released statement, he specifically referenced Williams as the likely Democratic nominee.

"The attacks on New Yorkers' wallets, safety, freedom and kids' education have been relentless and are causing more New Yorkers to hit their breaking point every day and flee the state. I look forward to the debate about which way our state should head from here, because so many New York individuals, families, and businesses have had enough of this failed one-party rule," his statement read.