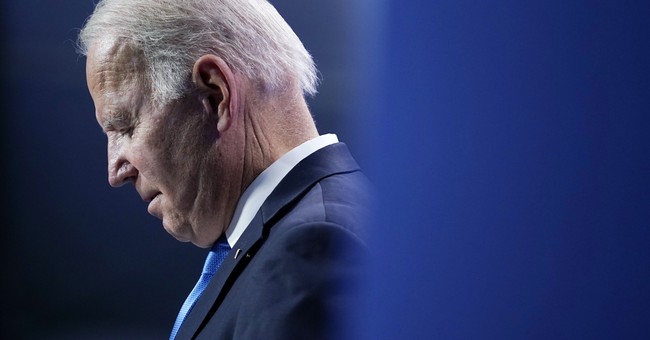 President Joe Biden has been spending his Thanksgiving holiday on Nantucket Island, which included getting some shopping in. However, on Saturday he was spotted by reporters with his mask pulled down so that it was not covering his nose or mouth. One can see in plain sight a store sign at the Murray’s Toggery Shop which says "REQUIRED FACE COVERING."

In his reporting for Fox News, Andrew Mark Miller mentioned that Nantucket reinstated an indoor mask mandate earlier this month.

As the president walked out, at about 4:45pm, he ignored a question about the omicron variant, which on Friday the World Health Organization (WHO) noted was a "variant of concern." That same day, the Biden administration announced that, starting Monday, travel will be restricted from eight African countries where the variant has been detected.

Dr. Anthony Fauci, who is Biden's chief medical advisor, and who supposedly has the president's complete trust, has said that even vaccinated adults should wear masks in indoor congregations.

A Friday night statement from the Centers for Disease Control (CDC) addressing omicron also mentioned the same guidelines when it comes to wearing masks indoors.

This is not the first time the president has been inconsistent with following mask mandates and CDC guidelines.

As Landon reported last month, the president was caught violating the indoor DC mask mandate while at Fiola Mare, an Italian restaurant in Georgetown.

Other examples include when he coughed into his hand, without a mask, and then proceeded to shake hands at an event last month.

Did Biden cough in his hand and then proceed to shake hands with people? pic.twitter.com/NxjYka2eKt

Then again, Biden has had some bizarre moments with mask mandates and guidelines for the opposite reasons.

As Guy wrote about in April, the president was seen wearing a mask for virtual summits over zoom and during meals, while already keeping with social distancing protocols. Biden received his second dose of the vaccine in January and his booster shot in September.

Biden, fully vaccinated and outside before signing the infrastructure bill, walks back to podium because he forgot his mask: "Oh, my mask."

Biden can't find the mask and then walks back to the signing table. pic.twitter.com/uG0YPkphYF

The president, as Katie also highlighted in April, broke with CDC guidelines by wearing his mask outside for an address despite being fully vaccinated. More recently he also had a snafu during the signing ceremony for the infrastructure bill earlier this month when he insisted on having his mask, which he had forgotten.