The Salvation Army Has Gone Woke Too Now, and They're Losing Support 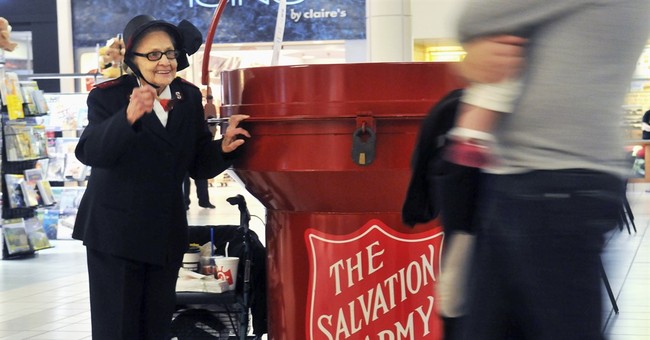 The Salvation Army is losing some long-time support this holiday season in light of the organization picking up on anti-racism and Critical Race Theory (CRT) teaching. Reporting from Carly Mayberry with Newsweek highlights the problematic teaching document in question, "Let's Talk About Racism," which aims to address "racism and the Church."

Definitions of institutional and systemic racism are included while real or perceived differences in life outcomes ("inequities") are attributable not to individual effort and other circumstances, but to discrimination. Sections address topics including police brutality, health care and Black unemployment linking such topics to "racial inequity."

That's troublesome for those who note The Salvation Army has been a leader in confronting racism long before the rest of the country and over five decades before the civil rights movement. And they're asking why then should members of an organization built by the Christian faith to actually assist people of all races in need, be repentant of behavior they never perpetuated?

One can find the document through a simple Google search. The question asked above is a worthwhile one, since one of the things the document hopes to achieve is to "Lament, repent and apologize for biases or racist ideologies held and actions committed." There's an entire section on "Lamenting and Repenting," which is a theme throughout the teaching document.

Of particular concern, and what is a theme of CRT programs, is the idea of rejecting colorblindness. The document makes several suggestions for white Americans for "challenges... to overcome and address," so as to "begin the process of creating lasting racial reconciliation and healing."

One long-time donor who has called it quits is Greg Koukl, who issued an open letter to the Salvation Army on November 1 shared over Facebook, as highlighted by Mayberry.

"I am not going to fall for the CRT “Kafka trap” that my protestations are actually evidence of my racism, and neither should you. There is a massive number of academics—black and white, Christian and non-Christian, atheist and theist—who have raised the alarm against the aggressive indoctrination and, frankly, bullying of CRT—not to mention the racial essentialism inherent in the view, the false witness it bears against virtuous people, and the general destruction it continues to wreak on race relations in this country. CRT has set us back 50 years," his letter writes in part.

Koukl makes other points clear, such as how he does acknowledge there is racism, but that CRT is not the way to go about it. "To be clear, I am not claiming there is no racism to be dealt with or are no racist Christians who need to repent. What I am saying is that critical race theory is not an accurate characterization of contemporary racial dynamics in America (as many have argued). Therefore, since its analysis is faulty, it offers a faulty solution, one that creates a whole set of new racial tensions and provides no productive resolution to them," he writes later in the letter.

The letter also closes by inviting people to come to their own decision on whether or not to donate. "I spoke at length about this turn on my radio show this week, inviting my audience to read your material for themselves and make their own judgments. I told them, though, that as for me, I was redirecting my giving elsewhere. I am not “cancelling” you, as many in the CRT movement would gladly do to me. Rather, I am carefully investing my resources in organizations that I fully trust will serve Christ in truth and only in truth, and I no longer trust The Salvation Army to do that," Koukl also writes.

While the preamble to the teaching document claims that it "is a voluntary discussion guide," Mayberry also wrote that training took place "in matters of racial equity in a compulsory manner in January" and that the "agenda for the Territorial Virtual Officers' Councils on Racial Equity workshop mirrored the "Let's Talk About Racism" resource put out by the Commission and was required of current officers."