Did Donald Trump Tease His Next Presidential Run in His Thanksgiving Day Message? 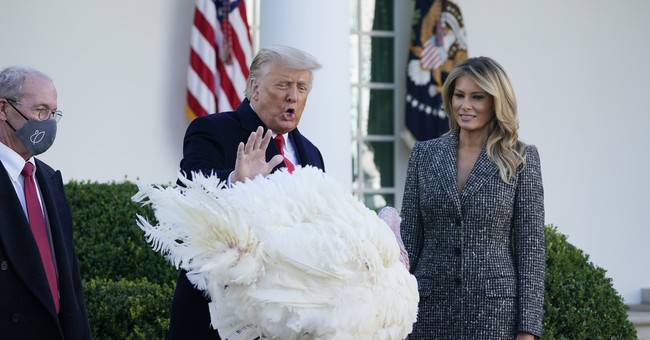 On Thursday, former President Donald Trump's spokesperson Liz Harrington shared a statement from him which may further indicate Trump is that much closer to announcing he'll be running for president again in 2024.

"...of greatness are counting on us. Enjoy your Thanksgiving knowing that a wonderful future lies ahead!"

"A very interesting time in our Country, but do not worry, we will be great again—and we will all do it together. America will never fail, and we will never allow it to go in the wrong direction. Too many generations of greatness are counting on us. Enjoy your Thanksgiving knowing that a wonderful future lies ahead!" the statement read.

Although Trump has not formally announced, some state and national polls have already begun to ask respondents about another Trump-Biden matchup, with Trump having an edge.

Harrington shared another tweet of the former president having an edge in several battleground states, including those he lost in 2020.

As Madeline reported, President Joe Biden plans to run for re-election in 2024, according to White House Press Secretary Jen Psaki.

Media outlets, though, such as The Washington Post, as I've covered, have for some time been discussing other candidates to replace Biden, such as Vice President Kamala Harris and Secretary of Transportation Pete Buttigieg.

If he does run again, Biden will be turning 82 not long after the 2024 election, and will be 86 years old when he leaves office, should he win re-election and serve out a full second term.