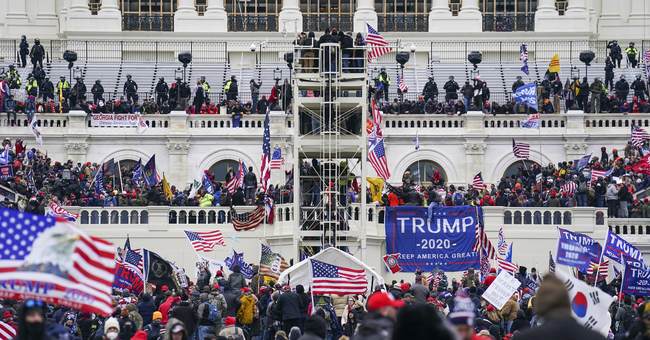 The January 6 select committee will not yet be getting their hands on documents from the Trump White House, following a Thursday ruling from the U.S. Circuit Court of Appeals for the District of Columbia. Attorneys for former President Donald Trump asked the court on Thursday to delay the National Archives from handing key documents over to the committee, which was supposed to receive them tomorrow. This ruling comes after U.S. District Judge Tanya Chutkan on Tuesday ruled against Trump's request to block the release of documents.

A panel composed of two judges appointed by former President Barack Obama and one by President Joe Biden issued an order granting the request, noting that "the motion for an expedited briefing schedule, which the court construes as a motion to expedite consideration of the appeal of the district court's order denying the motion for a preliminary junction, be granted."

"The purpose of this administrative injunction is to protect the court’s jurisdiction to address appellant’s claims of executive privilege and should not be construed in any way as a ruling on the merits," the judges also noted, referring to Trump.

POLITICO'S Kyle Cheney highlighted that this is happening on a particularly quick schedule. Briefs are due on November 16 and 22, and a reply on the 24th. Oral arguments will take place on November 30.

NEW: The appeals court has slowed down the Jan. 6 committee’s access to Trump White House records.

But the three-judge panel — which includes two Obama and one Biden appointee — set a really fast schedule.

His piece with Josh Gerstein also referred to the order as creating "a minor setback." And, as they further wrote, "[d]espite claims of urgency, the House did not object to Trump’s request for a temporary injunction while the appeals court considers the broader issues. The Justice Department also took no position on the temporary stay."

The Twitter account for the January 6 committee was quick to tweet about Judge Chutkan's decision with a statement from Rep. Bennie Thompson (D-MS), the committee's chairman. There was, however, no such statement tweeted about the panel decision from Thursday.

Rather, the committee is concentrating on former White House Chief of Staff Mark Meadows' refusal to comply with a subpoena. Meadows was among the first to be subpoenaed, back in September.

A letter from Rep. Thompson, addressing how Meadows feels "duty bound" to refuse to comply, claims "Mr. Meadows’s conclusion about his duty, however, relies on a misunderstanding of his legal obligations under the subpoena."

In conclusion, Thompson warns that Meadows could be held in contempt of Congress and a referral for criminal charges.

Last month, the House of Representatives voted to hold Steve Bannon in contempt of Congress for his refusal to comply with a subpoena he received from the select committee.

Trump has told former advisers and others subpoenaed not to comply, citing executive and other privileges.

Even more subpoenas were issued earlier this week, including key figures who served in the White House on January 6.

These six individuals include staff members of the former President’s campaign and individuals associated with the so-called “war room” that drove efforts to halt the counting of electoral votes in the runup to the violence of January 6th.

BREAKING: The Select Committee has issued subpoenas to ten former administration officials, including individuals who served on the White House staff at the time of the January 6th attack on the U.S. Capitol. https://t.co/dEs1NRYhFO