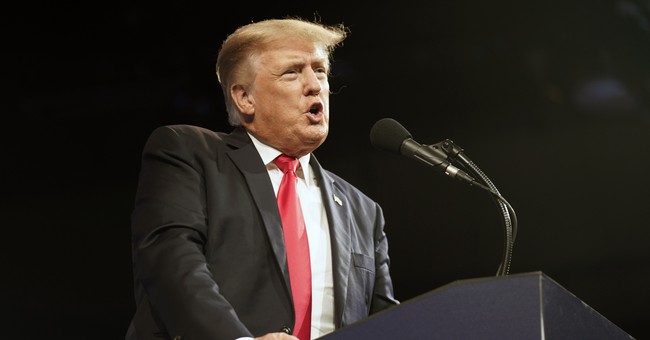 Former President Donald Trump has told former advisers of his who were subpoenaed by the January 6 select committee to defy the subpoenas, according to Betsy Woodruff Swan reported for POLITICO.

As Swan reported, also noting that the outlet has seen a copy of the letter:

But Trump is saying otherwise. In a letter that POLITICO viewed, a Trump lawyer tells them not to cooperate with the probe.

The letter stated the committee is seeking materials that are covered by executive privilege, as well as other privileges.

“President Trump is prepared to defend these fundamental privileges in court," the letter said.

Then the letter directed its recipient to hold back any documents about his White House work and to refuse to testify about his official duties.

The letter kicks off the first major political and legal test for the select committee, which is probing Trump supporters’ violent attack on the Capitol. It’s unclear how the committee will try to enforce the subpoenas of the Trump-allied foursome, but members of the panel — which includes seven Democrats and two anti-Trump Republicans — have said they may ask the Justice Department to prosecute witnesses who refuse to comply.

It also remains to be seen if the former Trump officials will follow Trump’s directions. If they are convicted of criminal contempt of Congress, they could face a year in prison and a fine of up to $100,000.

Scavino has not been able to be served, according to CNN.

Trump's directive comes after, for the third week in a row, the January 6 select committee has issued subpoenas. As was the case last week, the subpoenas are for organizers of events around that date. On Thursday, subpoenas went to Nathan Martin, Ali Alexander, and Stop the Steal LLC, with the two men appearing to be affiliated with the LLC, according to the committee.

The subpoenas require production of records by October 21st, 2021 and require Mr. Martin and Mr. Alexander to testify at depositions on October 28th and 29th, respectively.

A press release from the committee quotes a statement from Rep. Bennie Thompson (D-MS), the committee's chairman:

“The rally on the Capitol grounds on January 6th, like the rally near the White House that day, immediately preceded the violent attack on the seat of our democracy. Over the course of that day, demonstrations escalated to violence and protestors became rioters. The Select Committee needs to understand all the details about the events that came before the attack, including who was involved in planning and funding them. We expect these witnesses to cooperate fully with our probe.”

A committee press release notes that an organization known as "One Nation Under God" submitted a permit application in December 2020 for a rally about "the election fraud in the swing states" to be held at the Capitol on January 6.

Except there appears to have been withheld information:

Nathan Martin’s phone number and email address were listed among the contact information for “One Nation Under God.” A vendor who was also listed on the permit application informed Capitol Police that he was reporting to Ali Alexander and Mr. Martin and identified them both as being affiliated with Stop the Steal. On two of its websites, Stop the Steal advertised the Capitol rally event and sought donations to offset expenses for January 6th.

However, the permit application did not disclose any connection between Stop the Steal and the Capitol rally event. Further, when a Capitol Police official spoke with Mr. Martin at the end of December 2020, Mr. Martin claimed not to have any information about the rally and directed the official to speak with the vendor.   According to the police official, the vendor was “shocked” to learn this because he was in “daily communication” with Mr. Martin about the event.

After the January 6th attack, Mr. Alexander released a statement acknowledging that Stop the Steal had obtained the rally permit “for our ‘One Nation Under God’ event.” Mr. Alexander explained that it was the intention of Stop the Steal to direct attendees of the rally on the Ellipse to march at the conclusion of that rally to Lot 8 on the U.S. Capitol Grounds, which is the location for which the Capitol Police granted the permit for the “One Nation Under God” rally. Yet the permit application estimated the event would have only 50 attendees.

The committee also links to a Forbes article from June 14, 2021 from Jack Brewster, which reported that Alexander spoke at a rally on January 5 held by the Eighty Percent Coalition at Freedom Plaza in Washington, DC, where he led a chant of "victory or death."