Why is a U.S. Senator Going After a Supreme Court Justice? 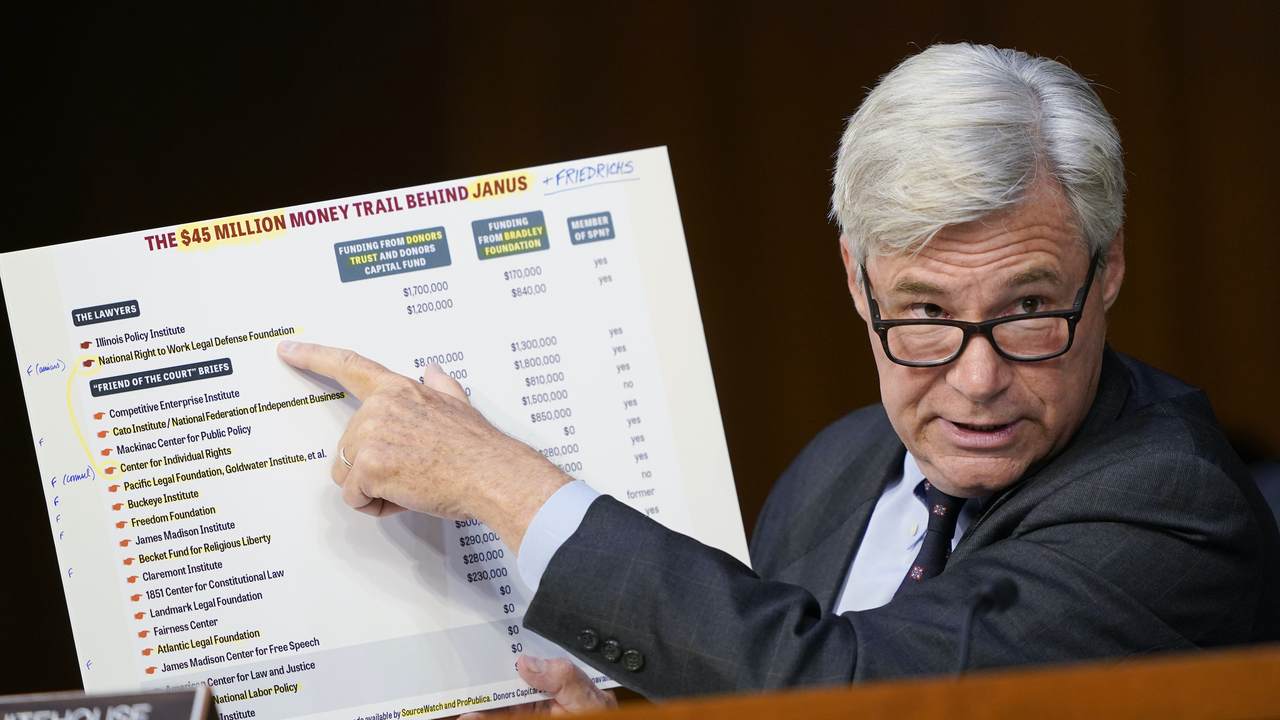 You may recall the antics displayed by Sen. Sheldon Whitehouse (D-RI) and how he used his time while now Justice Amy Coney Barrett was before the Senate Judiciary Committee. A year ago this week, actually, Sen. Whitehouse took up several minutes ranting about dark money, Leonard Leo, and the Federalist Society, while he gestured to poster boards throughout. Now, the senator is once again taking issue with a member of the judiciary. This time it's Justice Samuel Alito, who was nominated by President George W. Bush and who has served on the Supreme Court for over 15 years.

Sen. Whitehouse got into it very publicly with the justice, via a column published by left-wing site Salon on Thursday morning, "Justice Alito complains, but the evidence is clear: This Supreme Court was built by dark money."

The senator began his piece by mentioning remarks that Alito gave last month at the University of Notre Dame, which Landon covered.

During remarks given Thursday at the University of Notre Dame, Alito blasted the media for its inaccurate usage of the term "shadow docket," alleging that such claims undermine the legitimacy of the high court.

"The catchy and sinister term ‘shadow docket’ has been used to portray the court as having been captured by a dangerous cabal that resorts to sneaky and improper methods to get its ways," Alito said. "This portrayal feeds unprecedented efforts to intimidate the court or damage it as an independent institution."

On Thursday, the Senate Judiciary Committee called a hearing to examine the "shadow docket" complaints following the Court’s emergency rulings in the cases of the Texas abortion law, the Centers for Disease Control and Prevention (CDC) eviction moratorium and the "Remain in Mexico" immigration policy. Each of these cases was ruled in favor of conservatives, who currently have a 6-3 majority on the bench.

"The media and political talk about the shadow docket is not serious criticism," Alito pointed out during his Thursday speech before noting that emergency application is a standard protocol that is only utilized in the event that plaintiffs request it, which abortion providers did in the case of the Texas abortion law, which bans the procedure once a fetal heartbeat is detected.

"Journalists may think we can dash off an opinion the way they dash off articles," he continued.

The mainstream media and Congressional pro-abortion Democrats have been relentless against conservatives on the Supreme Court, particularly when it came to the Court allowing a Texas law to go into effect that bans abortion once a fetal heartbeat is detected, at around six weeks. The Court, in an unsigned opinion, stressed that it did so based on a procedural manner. As was to be expected, that law is currently tied up in the courts.

Going back to Sen. Whitehouse, here is how he sets up his thesis in one of his first few paragraphs. At least he lets readers know early on, then, what kind of a trail he is taking them down:

The problem for Justice Alito's sense of grievance is that the evidence supports our concerns. Alito has participated in a pattern of decisions — like the court's recent "shadow docket" ruling suspending abortion rights in our second-biggest state — that deliver wins for big Republican donors. Americans' perception that the court lacks independence, and the court's related drop in approval, doesn't flow from some left-wing conspiracy. It's a recognition that the evidence shows a pattern whenever certain interests come before the court.

Whitehouse references various issues with Alito, and conservative members of the Supreme Court in general. He is grossly taken aback by these "wins for big Republican donors" and the 6-3 and 5-4 decisions that have resulted in these wins.

And here are some of those passages where Whitehouse really gets into it:

The Federalist Society emerged as gatekeeper, monitoring Republican-appointed judges for allegiance to right-wing donor interests, while accepting gobs of anonymous donations. The Judicial Crisis Network and its offshoots sprang up as political attack dogs in the confirmation fights for Federalist Society-approved judges, funded by anonymous donations as big as $17 million. Other front groups groomed convenient plaintiffs to manufacture controversies to give the selected justices cases that would generate precedent favorable to donor interests. Secretly-funded groups also began to lobby the court in orchestrated flotillas — through so-called "friend of the court" briefs — signaling which cases are important to donor interests and advising judges which way the donors want them to rule. They have a perfect winning record.

The success of this operation is undeniable. And it is not legal conservatism at work. To reach the desired results, Republican justices often abandon the principles and doctrines of legal conservatism, like textualism and originalism. Take last term's Americans for Prosperity Foundation decision, which created sweeping First Amendment protections for the funders behind dark-money political groups, like the Koch-backed plaintiff in the case. As Justice Sonia Sotomayor pointed out in her dissent, the "decision discards decades of First Amendment jurisprudence" to produce a novel, activist creation in the law: constitutional protection for dark money. Good luck finding support for massive dark-money, special-interest spending in the debates at the Constitutional Convention.

If Alito and the Republican majority on the Supreme Court want the public to believe the court is not a secretive political "cabal" (his word) doing the bidding of big donors who helped put them there, they should deal with the evidence. Explain the 80-0 donor win record. Disclose who's behind the dark-money briefs. Stop the special-interest fast lane around the "case or controversy" requirement. Report gifts and hospitality — not worse than the other branches of government do, but better. Take precedent seriously when it doesn't suit you, not just when it does. Ditto recusal. Put yourself under a code of ethics, like every other federal judge. And understand that you have fouled your nest, not us, and that the Supreme Court must now at least match every other political institution with a renaissance of transparency. Democracy demands it. And the Court That Dark Money Built has squandered the benefit of the doubt.

For what it's worth other justices on the Supreme Court, appointed by Democratic and Republican presidents alike, have also spoken up as of late to communicate their ideas about what's going on with the Court.

Then again, such targeting of Supreme Court justices might just be what we can expect from Whitehouse. As Katie reported last month, the senator used his time during a hearing to address how the FBI failed to take seriously abuse allegations against convicted gymnastics doctor Larry Nasser, to relitigate the allegations against Justice Brett Kavanaugh, even comparing the situations.