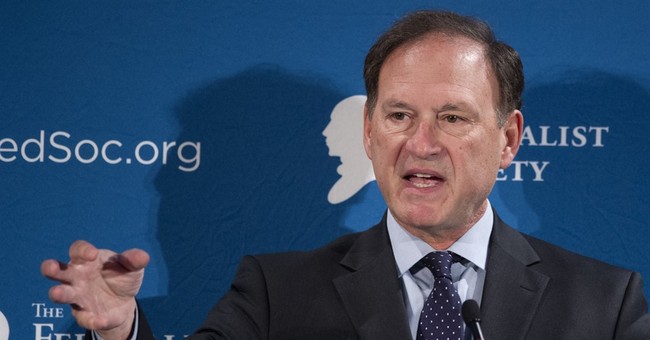 Justice Samuel Alito was highly critical of the media's coverage of the Supreme Court over assertions that the bench was using its emergency adjudication of politically-charged cases, such as the new Texas abortion law, to advance a political agenda.

During remarks given Thursday at the University of Notre Dame, Alito blasted the media for its inaccurate usage of the term "shadow docket," alleging that such claims undermine the legitimacy of the high court.

"The catchy and sinister term ‘shadow docket’ has been used to portray the court as having been captured by a dangerous cabal that resorts to sneaky and improper methods to get its ways," Alito said. "This portrayal feeds unprecedented efforts to intimidate the court or damage it as an independent institution."

On Thursday, the Senate Judiciary Committee called a hearing to examine the "shadow docket" complaints following the Court’s emergency rulings in the cases of the Texas abortion law, the Centers for Disease Control and Prevention (CDC) eviction moratorium and the "Remain in Mexico" immigration policy. Each of these cases was ruled in favor of conservatives, who currently have a 6-3 majority on the bench.

"The media and political talk about the shadow docket is not serious criticism," Alito pointed out during his Thursday speech before noting that emergency application is a standard protocol that is only utilized in the event that plaintiffs request it, which abortion providers did in the case of the Texas abortion law, which bans the procedure once a fetal heartbeat is detected.

"Journalists may think we can dash off an opinion the way they dash off articles," he continued.

Alito went on to address accusations that the court's decision not to block the Texas law from taking effect was evidence that Roe v. Wade would be reversed by calling such claims "false and inflammatory."

"We did no such thing and we said that expressly," he emphasized.

Here is Justice Alito complaining that “the media and political talk about the ‘shadow docket’ is not serious criticism” but “feeds unprecedented efforts to intimidate the court.” pic.twitter.com/KIiRaaFAOQ

The George W. Bush appointee explained that the Supreme Court emergency application for the Texas abortion case was due to timing, as the law's proponents did not seek relief until just over a day before it was set to go into effect.

"They asked us to rule within hours on the papers," Alito said.

Alito made clear that the Supreme Court does not allow a political agenda to influence their rulings regarding emergency appeals and that it simply follows standard procedure.

"This picture is very sinister and threatening, but it is also very misleading,” he said. "There’s nothing — absolutely nothing new about emergency applications… There is nothing new or shadowy about the procedure we followed in those cases."

Alito pointed out that, while the court has received an increased number of emergency requests that require quick decision turnaround this cycle, the court does not warrant the blame.