Will Gov. Ducey's Prediction About Sen. Sinema Come to Be? 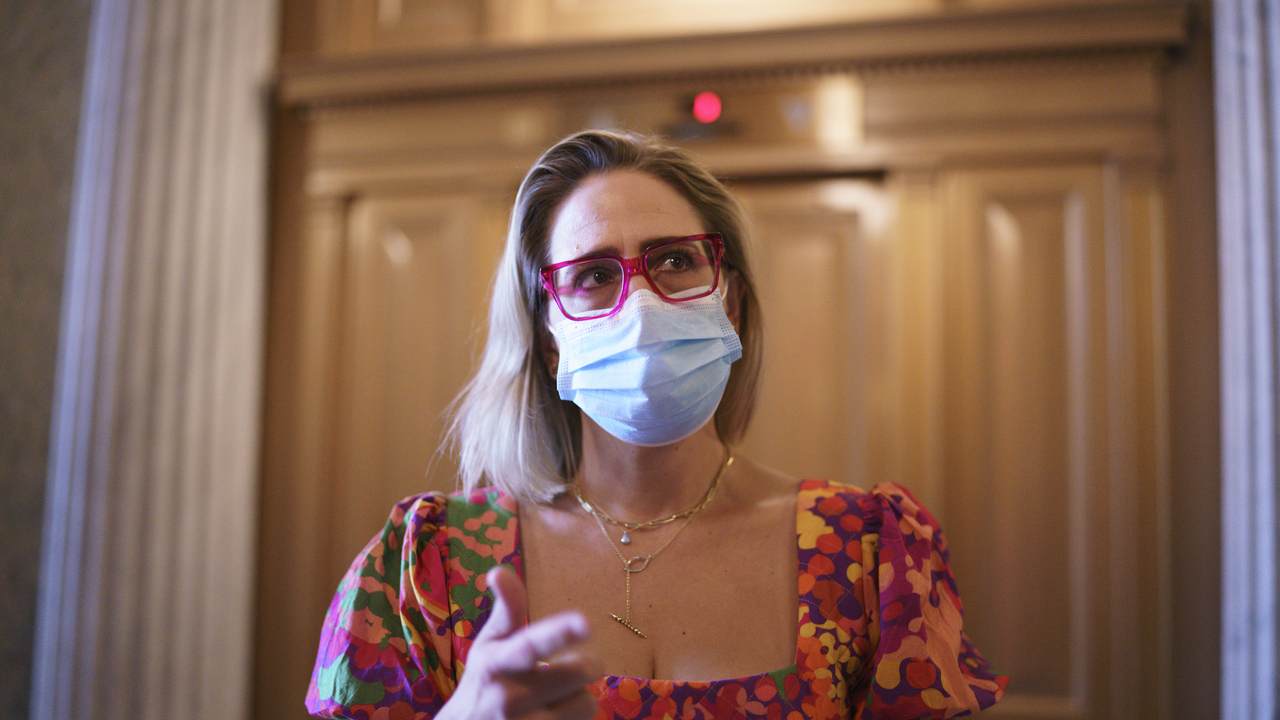 Sen. Kyrsten Sinema (D-AZ) continues to be a holdout when it comes to the spending bill, neatly packaged by the Democrats as President Joe Biden's Build Back Better agenda. Yet she won't remain this way if Gov. Doug Ducey's (R-AZ) prediction is correct. The governor told The Washington Examiner that he's sure Sinema is going to "cave."

"She's a politician, so of course she's going to cave," Anna Giaritelli quoted Ducey as saying.

Giaritelli also tied in Ducey as a potential senatorial candidate. While Sinema isn't up for re-election until 2024, Sen. Mark Kelly, also a Democrat, must face re-election in 2022, since he defeated Sen. Martha McSally, who had been appointed.

Ducey said he had no plans to run for Senate, though. He cannot run for a third term as governor in 2022, due to Arizona's term limits.

Where Ducey may have a point is that even though they are using the reconciliation process, Democrats cannot afford to lose any members. It's all hands on deck in a 50-50 Senate where Democrats are only in the majority because Vice President Kamala Harris serves as a tie breaking vote. The pressure on Sinema, as well as her fellow moderate Democrat, Sen. Joe Manchin (D-WV), has been intense to say the least.

No Republicans will vote for the $3.5 trillion spending bill.

A Tuesday report from David Siders with POLITICO actually addressed what Sinema's calculations might be. As he reported, citing Democrats:

[Sinema's] experience is a testament to the heightened expectations of Arizona Democrats. But it’s also indicative of a deeply polarized national environment that is increasingly intolerant of Sinema’s brand of centrist politics — whatever its local logic.

“She’s trying to be a moderate, because Arizona is a moderate state and the way you get elected here — or at least the way you have in the past — is to not be challenged in a primary and get your ass to the middle to try to keep enough swing voters in your camp,” said David Doak, a retired longtime Democratic strategist and ad maker living in Arizona. “Given the polarization — the leftists are more left now and the right-ists are more crazy now — your calculation needs to be different … Her calculation, I think, is off.”

It’s a plight that would be painfully familiar to a vanishing species in Washington: the centrist lawmaker who must hop left and right for their mere survival — risking the fury of hardcore partisans in the process. While Sen. Susan Collins (R-Maine) won reelection in 2020, within a few months of her victory she was officially condemned by her state party for her impeachment vote. In Alaska, Republican Party leaders this summer overwhelmingly endorsed Sen. Lisa Murkowski’s primary challenger, Kelly Tshibaka, ahead of Murkowski’s reelection bid next year.

Interestingly, it's a former staffer for Ducey who stands by Sinema, as quoted by Siders, though Ducey's name did not come up at all otherwise. Emphasis is original:

Polling in Arizona suggests that Sinema is making up for her loss of support among Democrats with Republicans and independents. A poll by Phoenix-based OH Predictive Insights last month found that while Sinema is viewed negatively by nearly a third of Democrats in the state, her approval rating was 46 percent, about the same as her fellow Democratic senator, Mark Kelly. A Bendixen & Amandi International poll earlier this summer found similar results.

“Arizona does have a history of having maverick senators who have challenged their own party from time to time, and Arizona voters have a history of rewarding that,” said Kirk Adams, a former Republican state House speaker and former chief of staff to Gov. Doug Ducey.

“There will be activists in the party and outside groups that will be very upset and will oppose her and will swear that they’re going to take her down in the next election,” he said. “But Kyrsten is always very strategic. I think she understands the state very well, and I think she’s going to be rewarded by those moderate Republican and independent voters.”

For what it's worth, former President Donald Trump narrowly lost Sinema's state of Arizona and Manchin's state of West Virginia won by over 68 percent of the vote. Further, of all 50 states, Biden's approval rating is the worst in West Virginia.

A significant takeaway from Siders' article is that it's the Democrats who are not happy with Sinema:

Calling Sinema an “obstructionist” rather than a centrist, Garrick McFadden, a former vice chair of the Arizona Democratic Party, said it’s “not just the hippies and the 20-, 30-year-old” Democrats who are fed up with her, but more moderate and institutional-minded Democrats, as well.

“I don’t understand the calculus,” he said. “It’s not like we’re asking her to do the Bernie Sanders or the Elizabeth Warren agenda. It’s the Joe Biden agenda.”

A video went viral, filmed and posted by the perpetrators themselves, of members from Living United for Change in Arizona (LUCHA AZ) following Sinema into the bathroom at Arizona State University (ASU) and demanding she support Biden's Build Back Better, as well as a pathway to citizenship.

President Biden downplayed such harassment. "I don't think they're appropriate tactics but it happens to everybody," he said. "The only people it doesn't happen to are people who have Secret Service standing around them, it's part of the process."

Then there's Sen. Bernie Sanders (I-VT), who would not sign onto a yet-to-be-published statement condemning the harassment of Sen. Sinema. He wanted an edit to the statement to include an edit that "While we hope Senator Sinema will change her position on prescription drug reform and support a major [budget] reconciliation bill..."

When it comes to the $3.5 trillion price tag, Sanders has lamented that it's not high enough.