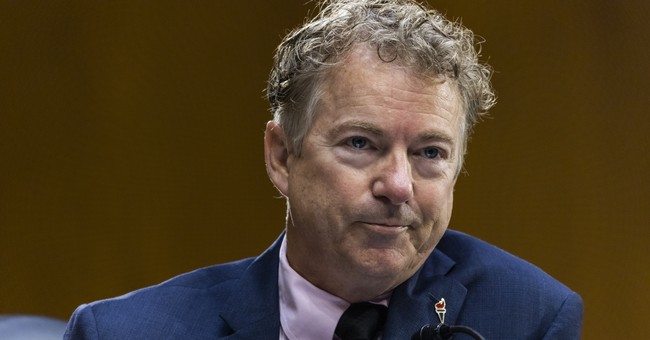 Yet another sitting member of Congress has been suspended from social media. As Katie reported, Sen. Rand Paul (R-KY) was suspended from YouTube on Monday night over a video which the platform claimed violated their "misinformation" policies. The suspension is for seven days, during which the senator cannot upload content to the channel, even and including speeches from the Senate floor.

In the video, Sen. Paul, who is also a medical doctor, cites a Danish and Vietnamese study raising concerns about the efficacy of masks. He did, however, emphasize that N95 masks do work, pointing out that doctors and nurses wear such masks.

During a Tuesday morning press call, Townhall asked if Sen. Paul saw such suspensions as "a pattern," to which he responded "without question." He explained that the pattern is "basically Google and YouTube are becoming an arm of the government" and that "this is where there's a question of whether the First Amendment actually ought to apply."

Sen. Paul said "for the most part the First Amendment doesn't apply to these entities." Earlier in the call, Paul acknowledged that as "a Libertarian-leaning senator," he thinks "private companies have the right to ban me if they want to."

That isn't the end of the conversation, though. Because, Sen. Paul pointed out, "if they become an organ of the government, if they are taking CDC pronouncements, which I think there is science on the other side of it, to argue against the CDC, which has become very politicized, if they are taking government edicts and then enforcing them, are they a private entity any longer, or are they becoming an organ of the government?"

And, it's a concerning pattern which, "whether or not it offends the First Amendment or not" is "terrible for the idea of speech and the idea that we can get to truth by hearing more points of view, not less."

He called it "incredibly elitist and arrogant" and spoke of how hard it is to imagine the "gal" of others who wouldn't let him to reference such studies. He wouldn't tell Sen. Amy Klobuchar (D-MN), for instance, that she couldn't say what she believed to be true about vaccines. Klobuchar, as Landon has reported, along with Sen. Ben Ray Luján (D-NM) has introduced legislation that would hold social media companies accountable for allowing the spread of "health-related misinformation" on their platforms during "public health emergencies."

Ironically, it was once Leftists who were all for questioning government edicts, such as with the Vietnam War and civil rights, Sen. Paul reminded reporters. But now, "many of the people on the left have given up on speech and they actually want to monitor and regulate speech because, you know, the Deplorables are, some of us are not apparently smart enough to be able to figure out the truth without the Left guiding us to the truth."

The video is still available on Rumble and Liberty Tree.

A badge of honor . . . leftwing cretins at Youtube banning me for 7 days for a video that quotes 2 peer reviewed articles saying cloth masks don’t work.

If you want to see the banned video go to Liberty Tree https://t.co/gsTUwuLZGL