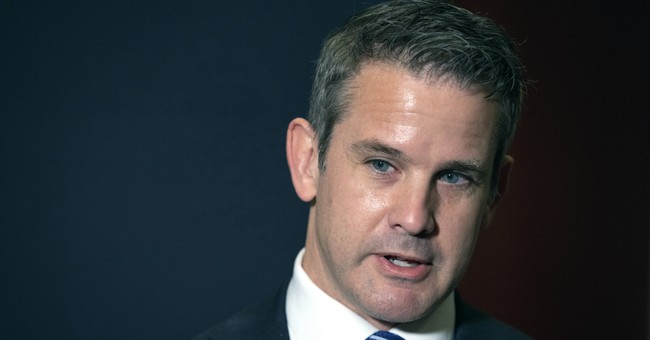 Well, it seemed to be inevitable after all the hints dropped last week. It's now official, though, that Rep. Adam Kinzinger (R-IL) will serve on a select committee to investigate the January 6 Capitol riot.

Speaker Nancy Pelosi (D-CA), who had played somewhat coy during a press conference last week about Kinzinger last week, made the announcement via a statement on Sunday:

“On January 6th, insurrectionists attempted to overthrow the government during the worst  assault on the Capitol since the War of 1812,” said Speaker Nancy Pelosi.  “It is imperative that we get to the truth of that day and ensure that such an attack can never again happen.  That is why we established the Select Committee to Investigate the January 6th Attack on the U.S. Capitol, which is bipartisan.”

“Today, I am announcing the appointment of Republican Congressman Adam Kinzinger, an Air Force veteran and Lieutenant Colonel in the Air National Guard, to serve on the Select Committee.  He brings great patriotism to the Committee’s mission: to find the facts and protect our Democracy,” continued Speaker Pelosi.

The congressman tweeted that he "humbly accepted," along with a statement.

Today, I was asked to serve on the bipartisan January 6th Select Committee and I humbly accepted. When duty calls, I will always answer. https://t.co/MszEBc0V7I pic.twitter.com/flIdSfYzZV

For months, we have searched for answers and what process we should use to get them. For months, lies and conspiracy theories have been spread, threatening our self-governance. For months, I have said that the American people deserve transparency and truth on how and why thousands showed up to attack our democracy, and ultimately, what led to the insurrection at the U.S. Capitol Complex on January 6, 2021.

“Self-governance requires accountability and responsibility. My faith requires the same of me, truth is necessary for order, and that’s what I will do. Let me be clear, I’m a Republican dedicated to conservative values, but I swore an oath to uphold and defend the Constitution—and while this is not the position I expected to be in or sought out, when duty calls, I will always answer.

“This moment requires a serious, clear-eyed, non-partisan approach. We are duty-bound to conduct a full investigation on the worst attack on the Capitol since 1814 and to make sure it can never happen again.

“Today, I was asked by the Speaker to serve on the House Select Committee to Investigate January 6th and I humbly accepted. I will work diligently to ensure we get to the truth and hold those responsible for the attack fully accountable.”

A press release on his website noted that Kinzinger will participate in the first hearing, to be held on July 27, which will hear testimony from Capitol Police officers.

That Kinzinger has been picked for the select committee is hardly surprising, and the same goes for Rep. Liz Cheney (R-WY), who was among the first members picked by Speaker Pelosi.

Those two Republicans were the only ones to vote in favor of this select committee.