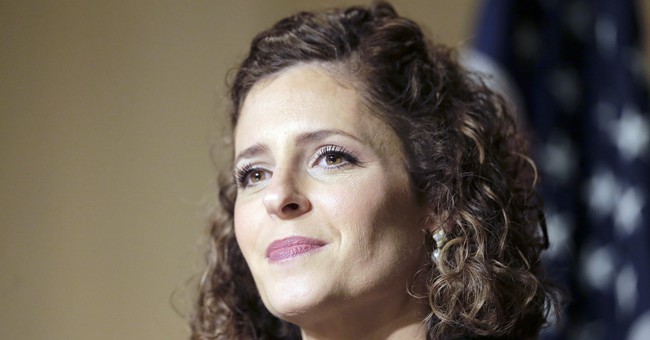 Townhall has been given a first look exclusive at the announcement that a new member, Rep. Julia Letlow (R-LA), has signed onto a letter to protect the Hyde Amendment. The congresswoman, who took office in April, became the 201th House member on Tuesday.

The letter was first circulated in January by Republican Study Committee Chairman Rep. Jim Banks (R-IN), and sent to congressional leaders "pledging to oppose any government funding bill that eliminates or weakens the Hyde Amendment or other current-law, pro-life appropriations provisions," according to a press release from January 26.

As Townhall has reported, the $6 trillion budget proposal from the Biden administration purposefully excludes Hyde Amendment language, which thus means American taxpayers will be forced to fund elective abortions.

That budget proposal is also under fire for its replacement of the word "mother" with "birthing person," which the administration has doubled down on.

Townhall was given statements from Reps. Letlow and Banks:

Rep. Julia Letlow said: “As both a Christian and a mother, I know how important it is to defend life. For almost 40 years, both Republicans and Democrats have agreed that taxpayer dollars shouldn’t fund abortions. It is unconscionable that this administration has chosen to break that longstanding precedent. I’m proud to join with my colleagues to defend the Hyde Amendment and stand up for our pro-life values.”

Chairman of the RSC Jim Banks said: “We are thrilled to have Rep. Julia Letlow join us at RSC in defending life and the conscience rights of taxpayers. Today’s Democrats are more radical on this issue than ever before, and we need top conservatives like Julia to help us stop them from mandating taxpayer-funded abortions.”

Since the inception of the Hyde Amendment in 1976, every single other administration has passed Hyde with bipartisan support. This includes the Obama administration, when Biden served as vice president.

Biden supported the Hyde Amendment for his entire nearly 50-year long career in office, up until June 2019, when he was still running in the Democratic primary. Now President Biden had been the lone holdout in the Democratic field.

As Townhall has also reported, Democrats in both the House and the Senate have already introduced legislation to repeal Hyde permanently.

The RSC has consistently been in favor of the Hyde Amendment. When the Biden administration's budget proposal was first announced last month, the RSC released their own, calling it the "Most Pro-Life RSC Budget Ever."