Trump Ally Hopes Former President Will Do This Next 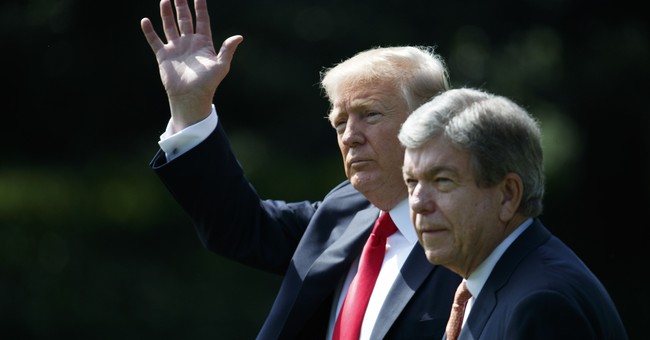 Sen. Roy Blunt (R-MO), a key ally of Donald Trump, had a message on Sunday morning about what he thinks the former president should do now. Sen. Blunt's suggestion that Trump look ahead to 2022, came during his appearance on NBC's "Meet the Press." Trump had addressed the NC GOP convention just the night before, where he devoted a significant portion of his speech to addressing his concerns with the 2020 presidential election.

EXCLUSIVE: Sen. Roy Blunt (R-Mo.) said Trump should be less focused on relitigating 2020 and should instead look ahead to 2022. #MTP@RoyBlunt: "He could be incredibly helpful in 2022 if he gets focused on 2022 and the differences in the two political parties." pic.twitter.com/5P05njnSBp

To the retiring senator's credit, Chuck Todd is not the easiest host out there when it comes to discussing the 2020 election and being able to get a word in edgewise. As one can see from the expert below, Todd seems to take a sort of perverse interest, delight even, in pushing his guests to have to answer for agreeing with the former president, who, as Todd admits, is very much a leading figure of the party.

CHUCK TODD: Well, I want to talk, though, but I don't know if your report is going to deal with the root cause, right? The root cause is you have the leader of your party, you know -- whether, whether everybody wants to acknowledge the former president as the leader of the Republican Party right now or not -- he seems to be the biggest, biggest fish in this pond now. He’s had -- his chief of staff was pushing the idea that Italy used military satellites to somehow rig the election. And he keeps doing this. And he did it last night in North Carolina. You're part of this group of Republicans that has stated that you don't believe in that nonsense, but you don't, you don’t really push back at the president for spreading these falsehoods so much. Are you not -- do you fear you're not doing enough? I mean, one in four people in your party believe these delusional things. Are you concerned about this?

SEN. ROY BLUNT: Well, I'm concerned we're losing faith in the election system. I do think it's important to have a bipartisan belief that the election system does what it's supposed to do, that the results that are the results of Election Day are what absolutely happened. You know, I served for eight years as the chief election official in my state. I was pleased to see Senator Manchin have the same view that we need to move forward on election reforms in a bipartisan way. I look forward to being a part of that. We'll see what happens with the John Lewis Voting Rights Act and other issues I think we can deal with and deal with in a way that's less partisan in trying to create political advantage for either side.

CHUCK TODD: Do you think the president believes this stuff or is exploiting a chunk of your party into convincing them to believe it?

SEN. ROY BLUNT: You know, I really can't analyze whether he believes it or not. I'm sure he believes that in a fair election he couldn't have possibly lost. And of course, he had the ability to go to court and prove whether that election was fair or not. Every -- the courts did not accept those, those ideas, and so we moved forward, and we continue to move forward. I do think President Trump is an incredibly popular figure in our party, certainly a political figure in my state. I'd like to see him get focused on the 2022 elections. There are plenty of things for Republicans to be talking about besides --

CHUCK TODD: Look, you're not the only --

CHUCK TODD: Sorry, Senator. You're not the only senator -- Republican that has said, "Hey, look. The guy's popular in the party, and there’s only so much --” The implication is, "There's only so much I can say or so much I can do to push back." It sounds almost like you're surrendering --

CHUCK TODD: -- to this nonsense.

SEN. ROY BLUNT: You know, I'm not running for office again. I'm not running for office again. So that's not my point. My point is he's popular and could be incredibly helpful in 2022 if he gets focused on 2022 and the differences in the two political parties. The Biden agenda is an agenda that Republicans are going to be talking about, defining themselves based on our differences on things like what is infrastructure. There are a lot of things to talk about. I think 2022 has great potential to be an important and good year for Republicans, and I hope President Trump puts his energy in that effort.

Taking out the cross talk and getting down to the main point here, Sen. Blunt has some rather thoughtful advice for the former president. Whatever concerns Trump has about the 2020 presidential election, and whether or not they're legitimate, he is still popular enough to aid his party when it comes to the 2022 midterms.

A rather illuminating poll from CBS/YouGov a few weeks ago provides unequivocal evidence that Republicans very much care about Trump, and think he represents the GOP.

Historically, with a few exceptions, the party which controls the White House loses seats in Congress during the midterms. That's going to be even sweeter for Republicans come 2022, considering Democrats hold a single digit majority in the House. They only have a majority in a 50-50 Senate because Vice President Kamala Harris serves as a tie-breaker.

Former President Trump could be of tremendous value to make that win even bigger than it is already likely going to be.

Last month, Rep. Dan Crenshaw (R-TX) gave a particularly memorable performance on "Meet the Press" in pushing Todd to discuss other topics than the 2020, specifically those which mattered to the constituents who elected the congressman.