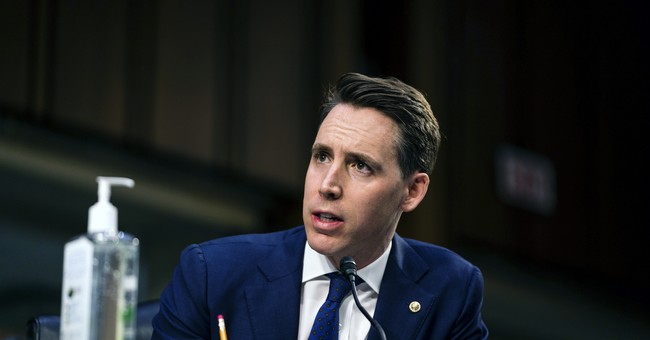 Sen. Josh Hawley's (R-MO) book, "The Tyranny of Big Tech," has just become a best seller. My interview with the senator and a review of his book was published around the time of the book's release. With this good news, however, comes the discovery that the senator is being targeted by American Edge Project, a dark money group that Facebook helped launch.

The Forbes article in question from Alison Durkee claims that "Josh Hawley’s Controversial Book Becomes A Bestseller—With Help From His ‘Big Tech’ Foes And Bulk Buys."

Durkee includes a statement from Regnery, the book's publisher:

Regnery Publishing denies “there were bulk sales that could have affected the various best seller lists,” president and publisher Tom Spence told Forbes in an interview, “and our own sales figures from Amazon and Barnes & Noble, which are numbers that we cannot manipulate, demonstrate that the book’s sales were more than sufficient to put it where it is on those best seller lists.”

Spence told Townhall that Durkee's piece went through various updates as they spoke at length about the topic. Durkee's article notes that it was last updated on the afternoon of May 15.

For authors to get their books on bestseller lists is something of a project, especially when it comes to such a list from The New York Times. Nevertheless, Hawley's book came in as number 13. Further complicating such a list is that it does not use BookScan to compile its list of bestsellers, which so many other lists do.

BookScan is a service that makes a record of every time a book is scanned. It is updated and compiled into a list on a weekly basis. Wall Street Journal and Publisher's Weekly use BookScan; both lists include Hawley as a bestseller, at number six.

Durkee's article also refers to a "dagger" symbol which accompanies Hawley's book on The New York Times list. This is included with books that may be impacted by "institutional, special interest, group or bulk purchases." Other books by conservative authors, such as Ted Cruz's "One Vote Away," also faced confusion to do with the book was affected by bulk purchases.

It is worth pointing out that when books are purchased by the author, which includes their campaign, the author does not receive royalties, in accordance with election rules. There is no evidence to suggest that Hawley did not properly go about this process. Further, when the author and his or her campaigns make this purchase, they come directly from the publisher's warehouse. Thus, there is no record from a seller, such as Amazon, to report to a best seller tracking list.

This is not the only way in which the senator has been targeted by the group over social media.

Lawmakers must consider the role of tech innovation in our economic recovery. Senator Hawley should prioritize policies that promote technology to elevate Missouri as a driver of innovation, instead of promoting policies that will forfeit America’s edge. https://t.co/wjmdkcLXUS

Lawmakers, including Senator Hawley, must consider policies that ensure our innovators remain competitive and can continue to lead in developing the technologies of tomorrow. Missouri and the nation’s economic recovery depends on it. https://t.co/QmG7P2NzkB

This applies to national and local media outlets as well. A fundraising email from the senator's campaign on Wednesday referenced an extensive profile piece of nearly 5,000 words on Hawley from the Washington Post, Michael Kranish's "Grievance, rebellion and burned bridges: Tracing Josh Hawley’s path to the insurrection."

Kranish opens his May 11 piece by writing, "Joshua Hawley was 13 years old, living comfortably as the son of a bank president when his parents gave him a book about political conservatism for Christmas."

The piece shares insight from "a middle school classmate, a law school professor, a conservative columnist who promoted him, and the Republican stalwart who recruited him to run for the Senate."

I’m not joking – The Washington Post tracked down a person I worked with when I was 12 years old to see what they thought of my objection. They interviewed friends of mine from high school; they even hid behind bushes to take a picture of my childhood home and looked into the books I read as a child.

The Kanas-City Star published "Josh Hawley's rise included warning signs of radicalism" on January 24. The article is behind a paywall.

As Matt highlighted, The New York Times actually interviewed Hawley's prom date back in March, as well as other classmates and his middle school principal.

Perhaps such dark money groups and media outlets should think twice before they make themselves look even more buffoonish. Surely they don't want to make a martyr out of Hawley, but that is the path they're going down as he's likely to have the last laugh.