Another Republican Leader Comes Out in Support of Liz Cheney Ouster 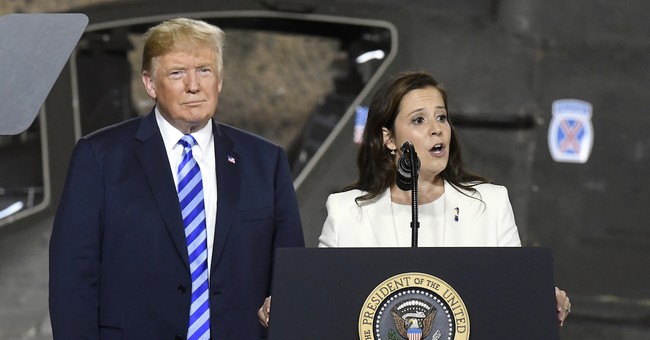 Thank you @GOPLeader for your endorsement for House GOP Conference Chair.

Together, as one team, we will stand up for the American people and #FIREPelosi in 2022. pic.twitter.com/zUhv1h4K71

"Do you support Elise Stefanik for that job," Maria Bartiromo asked McCarthy as his appearance on "Sunday Morning Features" came to a close. "Yes, I do," replied the minority leader. There you have it. A simple and direct answer.

Leader McCarthy made similar points to those made by Rep. Jim Banks (R-IN) on "Fox News Sunday," the focus being that Rep. Cheney is in a leadership position, and those members need to stick to a unified message, with leaders focused on "uniting the nation." However, Rep. Banks, who chairs the Republican Study Committee, did not speak to support or opposition to Rep. Stefanik.

It was during Rep. Bank's "Fox News Sunday" where host Chris Wallace was particularly intent on getting the congressman to address Rep. Stefanik's record. By the numbers, Cheney has an edge over Stefanik in a score card from Heritage Action, 80 to 48 percent. The former also voted with President Trump 93 percent, compared to Stefanik's 78 percent. The Club for Growth is a particularly vocal opponent of Rep. Stefanik replacing Cheney, referring to her as "a liberal."

Elise Stefanik is NOT a good spokesperson for the House Republican Conference. She is a liberal with a 35% CFGF lifetime rating, 4th worst in the House GOP. House Republicans should find a conservative to lead messaging and win back the House Majority.

That being said, Rep. Stefanik is considered a more loyal party member. Granted, anyone is compared to Cheney's outspoken views against Trump, which she has doubled down on, but loyalty is what Stefanik has been known for.

It's worth emphasizing that Stefanik tweeted and thanked Leader McCarthy not only for "your endorsement," but that her account has tweeted throughout the day highlighting this loyalty.

“When times were toughest during the haze of impeachment, there was no stronger advocate for the President, or the rule of law, than Elise Stefanik” - @JosephPinion

Thank you @SteveScalise for your strong endorsement for House GOP Conference Chair.

We are going to work together as a team unifying Republicans to take back the House in 2022! pic.twitter.com/kisPLMlCgu

A vote is expected this week. While Rep. Cheney handily survived being ousted in February, that likely had very much to do with the support she had from leaders like McCarthy. That support is no more.