Could These Plummeting Fertility Rates Send the U.S. into a Population Crisis? 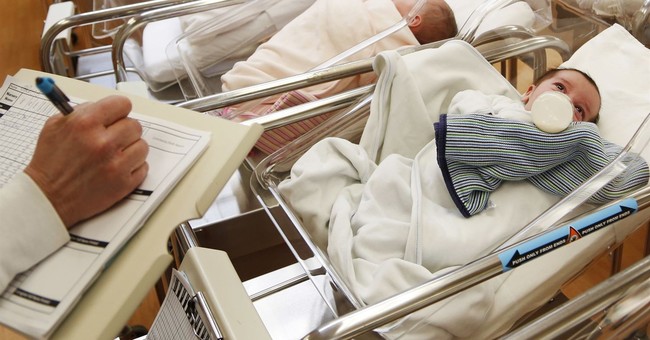 Earlier this week, columnist Kurt Schlichter had a piece out there, "Conservatives Need To Get It On." He has a point. The CDC just released figures which show that birth rates are down. According to the report:

There's more than COVID, though, to do with this consistent trend. As Janet Adamy with the Wall Street Journal reported in quoting experts:

Because the Covid-19 pandemic emerged in March, the figures capture just a short period at year’s end when the unfolding health and economic crisis could be reflected in women’s decisions about getting pregnant. Women typically have fewer babies when the economy weakens. Fears of getting sick, making medical appointments and delivering a baby as a deadly virus spread also dissuaded some women from pregnancy.

“The fact that you had this coincide with the time the pandemic hit is certainly cause for suspicion,” said Dr. Hamilton, a federal statistician and demographer. He added that it was too soon to gauge the exact impact of the pandemic on fertility.

Demographers say the data suggests that more fundamental social and economic shifts are driving down fertility. Births peaked in 2007 before plunging during the recession that began that year. Although fertility usually rebounds alongside an improving economy, U.S. births fell in all but one year as the economy grew from 2009 until early 2020.

“It’s not just Covid. It’s the fact that the birthrates never recovered from the Great Recession,” said Kenneth Johnson, senior demographer at the University of New Hampshire. “I’ve been waiting for years to see a big jump in fertility to women in their 30s and it hasn’t happened.”

Now we're used to hearing what a so-called overpopulation crisis could do. As Leah recently reported, British Vogue recently published a piece by Nell Frizzell, "Is Having a Baby in 2021 Pure Environmental Vandalism?" Such freaking out, though, is delusional.

Fortunately, Human Progress, a project of the Cato Institute, had data showing the opposite is true of Frizzell's hysteria.

.@NellFrizzell should read our #SimonAbundanceIndex. Children do not strain the world's resources.

In fact, the opposite is true: each new child is correlated with an increase in resource abundance.https://t.co/Y4Fx4vegGt https://t.co/lZf4mtod6M pic.twitter.com/ucLqJsviXC

A January 4 editorial from the Washington Post from last year read that "American’s dip in population growth is a warning we shouldn’t ignore," which noted that "Uncheck, these trends may mean less economic growth and a diminished support base for a large retired cohort."

The population concerns, by the way, to do with underpopulation, are even worse over in Europe than they are here.

Adamy had a somewhat optimistic take, but one which cannot be taken for granted:

U.S. fertility rates still remain above those of many other developed countries that have long struggled with low birthrates, such as Japan, Italy and Germany. “We are moving down toward that but we haven’t quite reached the midrange of all the European countries,” Dr. Hamilton said.

Japan is facing a crisis, actually, which was only made worse by the pandemic.

Reuters' reporting from last year about the pandemic's effect closed with this warning:

“There are various predictions on what will happen if the number of births keeps falling, but one thing is certain. Current systems, including the social security system, will no longer be functional,” Masaji Matsuyama, former minister overseeing the issue of declining births, told Reuters.

“It will be a crisis in which the very existence of the nation as we know it is at stake.”

As the population ages out, there are more older people than young ones, which means not only are there no young people to take care of their elders, but there aren't enough replacements.

While the United States is not to the level of Japan, yet, and hopefully we never get there, we can't get too excited. The CDC report also noted about birth rates that:

If we are going to be worried about population concerns, and we should be, it must be about underpopulation, not the Malthusian, anti-human idea of overpopulation, a belief system that both the Washington Post editorial board and the pro-life Population Research Institute say is refuted.