Liberal Attorney Marc Elias Is the Gift That Keeps on Giving 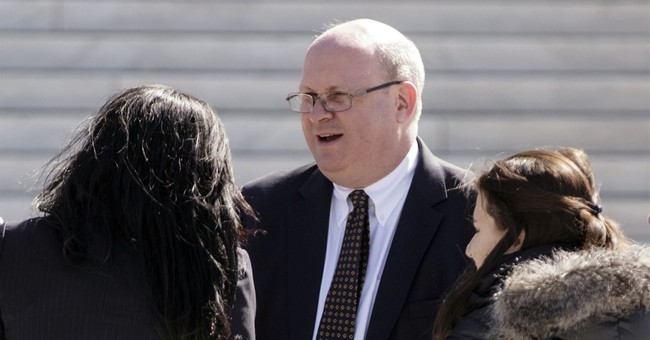 You may have heard of Marc Elias, the liberal attorney who vowed and went through with a lawsuit against the recently passed Georgia law on election reform. You'll certainly have heard of him now, though, with his inadvertently hilarious tweet from Thursday. Seriously, the law's critics--including from the highest profile of figures, President Joe Biden--are trying awfully hard to misrepresent the legislation so pitifully, as many of us have noted in our extensive reporting. While we can assume it wasn't an April Fool's joke, it sure would be a good one.

The new Georgia law will require voters to submit ID to vote by mail. If they use their driver's license, they need to provide the #.

One of the two numbers below is correct. If they put the other, it will be rejected.

Are you sure you would pick the right one? pic.twitter.com/3yQZAgioLO

Oh no! You mean you have to accurately fill out a form with your voter ID if you want your vote to count? That should be a given, but the particular issue with this tweet is how stupid Elias appears to think voters are. Yes, voters are likely "sure" that they "would pick the right one." Elias himself highlights the DL NO in his own tweet.

As a result, Twitter featured "DL NO" as trending on Thursday night. There are over 7,000 tweets as of the early hours of Friday morning, and I'm sure there will be more.

Psst. The driver’s license number is probably the “DL No.” https://t.co/DddkgNDW18

I would probably pick the one at the top that says "DL No" (aka drivers license number) because I'm not a moron https://t.co/BWaAUfmThe

This is what all the fuss about “racist” voter ID laws in Georgia is about?!?

That they think a certain demographic won’t be able to copy the field that says “DL No”.

This dummy can’t figure out that “DL. NO.” means driver’s license #. https://t.co/zzogiXd96b

It's harder to say it better than this.

Apparently Marc Elias thinks Black people are too stupid to know that "DL NO." is where they can find their driver's license number https://t.co/fIvIdGkfDM

I'd pick the "DL NO" one since it's asking for the driver's license number. I guess I have enough faith in people to think they aren't complete morons. Liberals, on the other hand, think black people are stupid. https://t.co/EMYQ4pnv5K

I know progressives will disagree with me on this, but I'm actually pretty confident in black people's ability to know the alphabet.

When Gov. Brian Kemp signed the legislation, Elias tweeted about the law as well, including in a back-and-forth with Stacey Abrams in which he promised a lawsuit.

And an immediate lawsuit. I promise. https://t.co/LcIXFBvcOT

Elias also represented Rita Hart--the Democratic candidate for Iowa's 2nd district who tried to steal the seat from Rep. Mariannette Miller-Meeks. He found his way into my reporting on that as well, back before she ended her contest, with added emphasis:

As Rep. Miller-Meeks has pointed out in standing by her legitimately winning the race, Hart did not file a lawsuit with the Iowa courts. Her attorney, Marc Elias, whom Republicans raise conflict of interest concerns with, claimed there wouldn't be enough time to do a recount, as the Wall Street Journal reported.

In his Twitter bio, Elias brags about being "The most dangerous lawyer in America."