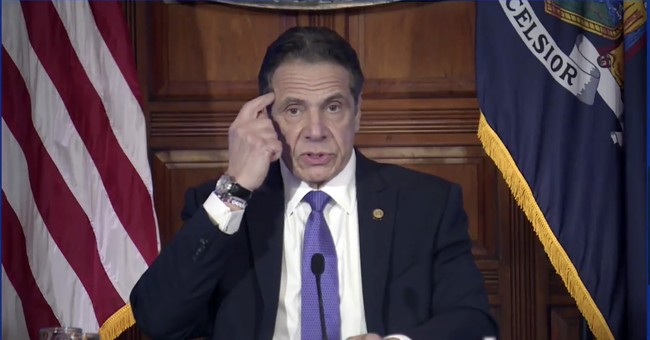 On Friday, a seventh woman, journalist Jessica Bakeman wrote a piece for The New Yorker, detailing her accusations against Gov. Andrew Cuomo, which involved multiple instances of sexual harassment. As Bakeman puts it in "Cuomo Never Let Me Forget I Was a Woman:"

It’s not that Cuomo spares men in his orbit from his trademark bullying and demeaning behavior. But the way he bullies and demeans women is different. He uses touching and sexual innuendo to stoke fear in us. That is the textbook definition of sexual harassment.

Bakeman detailed how Cuomo "refused to let go" when it came to his handshake, also charging that he "put his other arm around my back, his hand on my waist, and held me firmly in place." Cuomo also insisted on a picture:

Keeping his grip on me as I practically squirmed to get away from him, the governor turned my body to face a different direction for yet another picture. He never let go of my hand.

Then he turned to me with a mischievous smile on his face, in front of all of my colleagues, and said: “I’m sorry. Am I making you uncomfortable? I thought we were going steady.”

Cuomo emphasized repeatedly in a March 3 press conference--his first time publicly addressing the accusations--that he didn't know he had made anyone feel uncomfortable. Examples include:

I now understand that I acted in a way that made people feel uncomfortable. It was unintentional and I truly and deeply apologize for it.

I feel terrible that these people felt uncomfortable.

Bakeman's piece also includes some specific behaviors from Cuomo and his staff towards reporters:

Cuomo’s top staff members often find pleasure, even glee, in torturing reporters on the Capitol beat. For a holiday party one year, the administration made a video roasting us as a gift. The background track: an instrumental version of “F*ck You,” by CeeLo Green.

Another gift, one that I saved, is a framed mock Boy Scouts badge that instead reads “Cuomo Scouts.” At the center is an image of Cuomo smiling above a banner with the words “In Andrew We Trust.” Apparently, he fancies himself God.

My name is also on the badge; the gift was personalized. Embroidered lettering across the top declared me a “survivor” of “Camp Cuomo.”

Again, this is the seventh accuser. Unless you've been living under a rock, or are just as much in denial as the governor himself, you've noticed that the news cycle has been dominated with accusations of sexual misconduct against Cuomo, interspersed with Democrats and Republicans alike calling on the governor himself. Sens. Kirsten Gillibrand and Chuck Schumer--the latter who is the Senate Majority Leader no less--issued a statement on Friday evening calling on the fellow New York Democrat to resign.

Cuomo remains steadfast in his refusal to resign. On Friday--long before Gillibrand and Schumer issued such calls--he gave a press conference in which he not only refused such calls but questioned the motives of his accusers and blamed cancel culture.

"People know the difference between playing politics, bowing to cancel culture, and the truth," he stated, later adding, "New Yorkers know me. Wait for the facts. Then you can have an opinion."

Predictably, his accusers did not react well, not just to Cuomo, but about the then-silent Sens. Gillibrand and Schumer. One of those accusers, Lindsey Boylan, issued a series of tweets in which she at length called Gillibrand and Schumer "cowards" and vowed to support their primary supporters, including through a PAC.

You are cowards @SenGillibrand @SenSchumer and I look forward to supporting whoever primaries you.

I literally plan to open a PAC to oust you both, you colossal cowards. Get ready!

Not only will I help fund this, but I will show up on every talk show to oppose you both @SenSchumer and @SenGillibrand. I will call you out for the cowards you are. I am so tired of your lack of courage. It’s tied to every problem we have in this country.