'Reckless and Dangerous': Cuomo Lashes Out at Democrats Calling for His Resignation 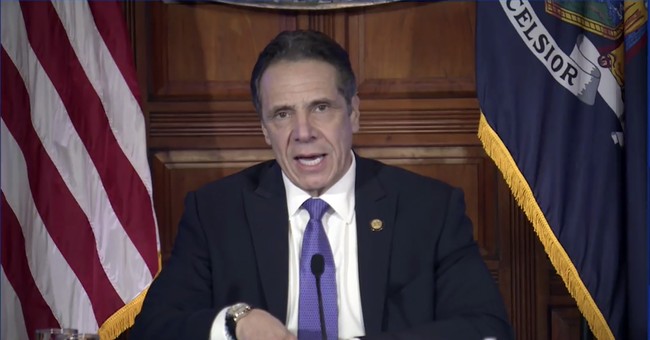 On Friday, more than a dozen congressional Democrats called for New York Gov. Andrew Cuomo's resignation after six women came forward to accuse him of sexual misconduct. New York Reps. Jerry Nadler and Alexandria Ocasio-Cortez were among those lawmakers. Those demands come on top of nearly 60 state Democratic legislators calling for him to step down. Cuomo held a conference call with the press following those new demands to address both the accusations and the calls for him to step down.

"I am not going to resign," the governor said.

"I respect any politician's right to take a position on anything," Cuomo said in response to the Democrats demanding he resign. But he wondered how they came to a conclusion "before they knew the facts." He added that making such assumptions is “reckless and dangerous."

"Women have a right to come forward and be heard," Cuomo said of his six accusers. But, he denied the allegations and questioned the accusers' and the politicians' motives.

There are two investigations underway, and he said "no one" is wanting those reviews to be completed sooner than him.

"People know the difference between playing politics, bowing to cancel culture, and the truth," he stated, later adding, "New Yorkers know me. Wait for the facts. Then you can have an opinion."

Cuomo: "People know the difference between playing politics, bowing to cancel culture and the truth...I am not going to resign. I was not elected by the politicians. I was elected by the people."

He goes onto add he must be a good guy b/c he's won so many elections (2/) pic.twitter.com/eXTz0vbyDa

"I never harassed anyone, I never abused anyone...and I never would," he insisted.