Sen. Perdue Calls on Ossoff to Denounce Warnock's Comments About the Military 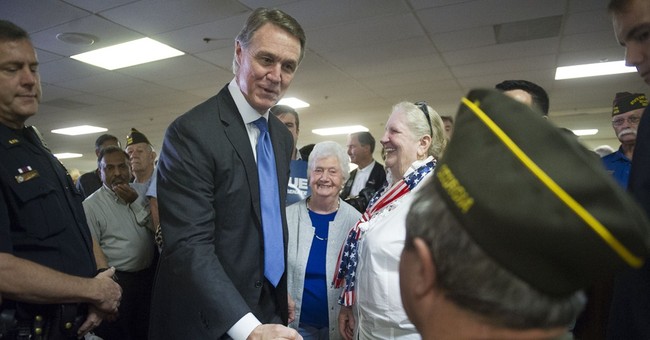 After Rev. Raphael Warnock’s horrific comments resurfaced, in which he said that "nobody can serve God and the military," his fellow Senate candidate in Georgia’s pair of runoff elections remains quiet.

Incumbent GOP Senator David Perdue called on Warnock to apologize for his sentiments, and for Jon Ossoff to denounce them.

"I am outraged about Reverend Raphael Warnock's remarks that he made from his pulpit in his church that you 'can't serve God and the military.' As a member of the Senate Armed Services Committee, I know that the best - and I mean the very best - of America is in uniform around the world, protecting every one of us with honor and dignity,” Sen. Perdue said on Wednesday. “Thousands of Georgians proudly serve in our Armed Forces, and anyone who represents them in the United States Senate should treat them with dignity and honor. Warnock's conduct deserves condemnation, and his running mate Jon Ossoff's silence on this speaks volumes to his own character. I hope Ossoff will join me in urging his teammate, Warnock, to immediately apologize to those who serve our country and their families."

Warnock’s remarks are clearly outside of the mainstream. He received backlash from a handful of veterans, with some even calling for him to exit the race.

This is an insult to everyone who served.

.@ReverendWarnock says you can't serve God and the military.

I beg to differ.

I've been doing both for the past 24 years! #GASen https://t.co/8LhtKEQbLo

GA Dem: @ReverendWarnock "America, nobody can serve God and the military."

I disagree. I did both. Proudly.

It's faith that gets you through deployments in war zones.

It's faith that sustains family while you're overseas.

For many, it's faith that calls you to serve. pic.twitter.com/HY5a9eZrJl

Georgia is home to nine military installations and an abundance of military veterans. Senator Kelly Loeffler (R-GA), whom Warnock hopes to unseat, also demanded he apologize to veterans and active military service members.